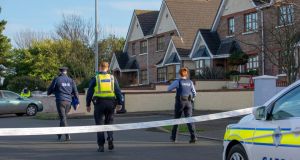 The scene in Ardee, Co Louth, where the woman’s body was found. Photograph: Ciara Wilkinson

A 32-year-old man has been arrested after the body of a decapitated woman was found in a house in Co Louth on Tuesday morning.

The man was arrested at a different house in the Ardee area and is being questioned at Drogheda Garda station.

Gardaí began inquiries after the discovery of the body of a woman in her 50s at her rented home in the Clonmore estate in Ardee at 11.30am.

Early indications are that the woman suffered a very violent death. Gardaí described as “gruesome” the murder scene discovered by neighbours of the dead woman.

A group of locals on the Clonmore estate where the dead woman lived with her husband found her decapitated remains after a friend called on her to take her out by arrangement on Tuesday morning.

An axe and bloody clothing, which gardaí believe were used by the killer, have been recovered.

When the news initially broke that a woman had been found dead in her home on the Clonmore estate, there were concerns she may have been attacked by an intruder or prowler who was still at large.

Supt Des McTiernan moved to allay those concerns and said while the murder of the mother of two was “very tragic” gardaí had made significant progress in solving the crime.

“We have, so far, one person arrested and we’re not looking for anybody else,” Supt McTiernan said, adding other people were aiding the inquiry.

“At this moment in time, I am appealing to people to bear with us. We have somebody in custody and we’re not looking for anyone else.

“We’re quite anxious to get on with the investigation and to bring it to a conclusion, bearing in mind the tragic circumstances.”

Supt McTiernan added that the killing was a “contained” situation - occurring within a group of closely linked Polish nationals - and gardaí did not envisage the inquiry would lead them to any other criminals or locations.

“We have the person that we believe was involved in the incident arrested at Drogheda garda station,” he said.

The woman was attacked in her home by a 32-year-old man well known to her. He then left the property and just moments later the woman’s friend called to take her out and discovered her dismembered remains.

The dead woman’s husband was in work at the time of the killing, just before 11.30am when the alarm was raised.

Gardaí have established that after leaving the crime scene the killer took a taxi to a location about 8km away, to the area of Drumconrath, where he tried to dump evidence.

Detectives said while the inquiry was still in its early stages, progress had been rapid and they were expected criminal charges to be approved by the DPP very quickly.

The dead woman worked in a vehicle modification company in Co Louth. A mother of two and a grandmother, she had been living in Ireland for over a decade.

Local people who spoke to The Irish Times on the Clonmore estate said the dead woman had lived there with her husband in a rented property for a number of years. One described her as “a lovely woman”.

Gardaí earlier sealed off the property where the body was found. It is a large semi-detached house in a cul-de-sac just outside the centre of Ardee.

Three houses have been sealed off in Ardee as part of the garda investigation. As well as the house where the body was found, the property where the suspect was arrested has also been sealed off and is being searched.

A third property, also linked to the man who was arrested, has been sealed off.

Another woman, from abroad and living on the Clonmore estate, said on Tuesday she had called the gardaí and alerted them to the incident.

She said she became aware something was wrong when she heard screams coming from the property where the body was found.

When she went to investigate she found other neighbours in the house. They had gone to check on the woman and found the body.

Flowers were brought to the scene by Richard Lynch, who with his wife Wendy is the landlord of the house in the Clonmore estate, where the deceased lived.

Mr Lynch said the woman lived there with her husband and he last spoke to the couple shortly before Christmas.

“We advertised the house seven years ago and they came on board. We had no problem with them. You couldn’t get better,” he said.

“They might ring us to say there was a bit of post there as we used to live there ourselves.

“We were very shocked (today), I think it was more the gruesome way her life ended, that is the biggest shock. I think if it was a massive heart attack (she had died from) it was a huge shock but the way it happened is unbelievable, you can’t get over it. It was absolutely shocking, it doesn’t bear thinking about. It is an awful tragedy.”

Fr Brian Slater said parishioners said prayers for the deceased woman, her family and the community at a prayer group meeting. “A lot of people are in shock. They can’t believe this is happening in their town, in sleepy wee Ardee. They are looking for answers. All we can do at this time is pray for the deceased and the wider community,” he said.