Man charged with murder of two people in Belfast flat 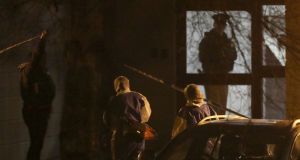 A PSNI officers lifts the cordon tape for PSNI forensic officers as they enter a building on Kinnaird Close in Belfast, after the bodies of a man and a woman were found in an apartment on Monday afternoon. Photograph : Liam McBurney/PA Wire

A man has been charged with murder after two people were stabbed to death in a flat in north Belfast.

The bodies of the man and woman were discovered in a flat in Kinnaird Close on Monday afternoon.

The victims have been named as Frances Murray (37) and Joseph Dutton (47).

On Tuesday, the PSNI said the man had been charged with two counts of murder.

He is expected to appear before Belfast Magistrates Court on Thursday, December 26h.