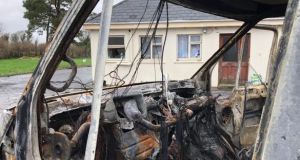 The scene at the house outside Strokestown, Co Roscommon after security staff were attacked by a vigilante gang. Photograph: Peter Murtagh

A security company whose staff were targeted in a violent attack while guarding a house in Co Roscommon after an eviction has been fined for working in the Republic without a licence.

GS Agencies Limited of Portadown, Craigavon, Co Armagh, was found guilty of six breaches of the Private Security Services Act, which governs the private security sector and sets out the criteria that companies providing security services in the Republic must meet.

Judge Deirdre Gearty at Castlerea District Court on Friday fined the company €500 for each of the six breaches and also awarded costs of €7,500 against it.

The prosecution was taken by the Private Security Authority (PSA) after an investigation into the “provision of an unlicensed security guard service” at a house in Flask, Co Roscommon almost two years ago.

The prosecution and conviction related to security personnel taking up position at the house after the eviction and did not relate to the eviction itself. Evictions, or repossessions, are not covered by the Private Security Services Act and under law they can be carried out by anyone, with no licence required and force permitted if required, once a court order has been granted.

The eviction of farmer Anthony McGann, along with his sister and brother, from their house in Falsk, near Strokestown, in December, 2018, was ordered by the High Court after a judgment was given against him for an unpaid debt to KBC Bank.

The eviction was recorded by bystanders and proved controversial when the footage emerged, with unidentified men with Northern Irish accents using force.

The group who carried out the attack was estimated to number about 20 people, with six of the security guards’ vehicles set on fire and destroyed.

After the attack the security workers were either taken to hospital or fled the house in Falsk. The next day the McGann siblings moved back into the property and remained there, with their dispute with KBC continuing in the courts. KBC first obtained a possession order in respect of the property in 2012 and the case first reached the courts in 2009.

Speaking after the convictions on Friday, the PSA’s chief executive, Paul Scallan, said the case arose from the authority’s “investigations conducted around security services which were provided subsequent to a repossession”. He added the PSA had no “statutory role in regulating” repossessions.

“In this instance, a security guarding service was provided at a location in Falsk in the days following the repossession. Such services require a PSA licence and in this instance, the security provider, GS Agencies Limited was unlicensed.”