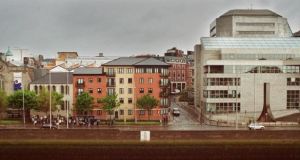 Essex Quay and Wood Quay on the River Liffey with Fishamble Street in the centre Photograph: Cyril Byrne

A man and a woman have been released without charge after being interviewed in connection with a stabbing incident in Dublin city on Sunday evening.

A man in his 20s sustained apparent stab wounds during an incident on Essex Quay, next to the Civic Offices at around 4.40pm. He remained in a stable condition in St James’ Hospital on Monday night.

A man and a woman, both in their 20s, were detained on Sunday night in connection with the incident. They were released from Pearse Street Garda station without charge on Tuesday morning.

The Garda press office said a file will be prepared for the Director of Public Prosecutions.