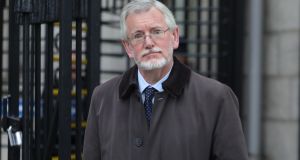 Declan O’Callaghan has been suspended by the High Court. Photograph: Collins Courts

Kilrane O’Callaghan, the Roscommon law firm whose principal Declan O’Callaghan has been suspended by the High Court, is being investigated by the Garda National Economic Crime Bureau.

The Ballaghaderreen firm, which is now run – under the supervision of the Law Society – by Mr O’Callaghan’s daughters, solicitors Aoife O’Callaghan and Eimear O’Callaghan, has been engulfed by accusations of money being taken from client accounts without prior authorisation.

In most instances, the money allegedly taken from clients without their authorisation related to personal injury compensation awards or to inheritance. Unless the money is returned by Mr O’Callaghan, the Law Society, the solicitors’ representative and regulatory body, faces the prospect of having to reimburse clients from its own compensation fund.

The Law Society’s investigation of the firm is due back in the High Court on December 19th when a day has been allocated to deal with it by the court’s president, Mr Justice Peter Kelly.

It is understood the society’s view on the case has hardened considerably in recent days and it would be open to it to seek further orders against the firm, including closing it altogether and freezing all accounts and removing all files to the society’s Dublin offices.

At the time of the alleged unauthorised takings of money from client accounts, Mr O’Callaghan was running the legal side of the firm while his wife, Mary Devine O’Callaghan, ran the business side.

Since Mr O’Callaghan’s suspension in July, Mrs O’Callaghan has remained as office manager but is no longer the sole signer of company cheques. Her continuing role has drawn complaints to the Law Society from at least one law firm acting for a client claiming Kilrane O’Callaghan owes them money.

Late last month, a formal complaint about Kilrane O’Callaghan was made to the Garda National Economic Crime Bureau, formerly known as the Bureau of Fraud Investigation. The specific complaint concerns one of several allegations of misappropriation of client funds by Mr O’Callaghan, according to sources.

An Garda Síochána did not comment on the case.

Last July, Mr Justice Kelly, in suspending Mr O’Callaghan and directing that he cease operating as a solicitor, also directed that the relevant statutory authorities be informed of the situation regarding the firm.

In early November, the High Court was told by counsel for the Law Society that this had been done. However, the statutory body referred to in court was not identified and the Law Society declined to say whether it was the Garda.

Mr O’Callaghan has been in breach of Mr Justice Kelly’s order of July by failing to lodge money to his client account to make good the shortfall, as directed by the court.