Accused remanded to appear before court again next Friday 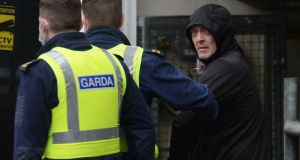 A man has appeared in court charged with the murder of a male earlier this year.

The court was told the 47-year-old accused man was arrested at 12.18am on Sunday and charged at 12.50am. When the charge was put to him by Det Sgt Peter Cooney the accused made no reply, Judge Éirinn McKiernan was told.

Mr Cruise is charged with the murder which happened in January. The accused man, who appeared in court wearing a black jacket, grey trainers and blue jeans, was represented by solicitor Eleanor Kelly.

She made an application for legal aid to the court on the basis Mr Cruise was on disability allowance. Legal aid was granted.

The court was asked by Ms Kelly that Mr Cruise receive any medical attention required while remanded in custody.

Reporting restrictions mean the victim whose death gave rise to the murder charge cannot be named at this time and no further details about his death can be disclosed at present.