Nothing is straightforward in the controversy over symphysiotomy 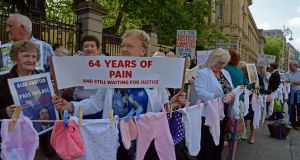 Members of the Survivors of Symphysiotomy group protest outside Leinster House in June 2013. Photograph: Eric Luke

The symphysiotomy controversy involves two related issues, neither of which is straightforward.

One is the use of the procedure itself, which continued to be used in Irish maternity hospitals in the second half of the 20th century, despite it having fallen out of favour in other western countries.

The second issue is the response of the State when an RTÉ Primetime programme in 2010 sparked a public controversy over the use of the procedure.

Symphysiotomy is an operation to widen the mother’s pelvis to allow a baby to be delivered. It involves the severing of the fibres joining the public bones at the front of the pelvis. so as to increase the size of the birth canal when it is considered to be too small relative to the baby due to be born.

Many women who received the procedure argued that it had significant debilitating side-effects.

The main explanation offered as to why the procedure was used here long after it was abandoned elsewhere has to do with the Catholic nature of Ireland during the years in question.

Women tended to have many babies, and the procedure could be safer than Caesarean section.

Sterilisation and contraception were considered off-limits due to the Catholic beliefs prevalent at the time, and this fed into the calculations being made by medical staff in Ireland, as against those of their colleagues in other jurisdictions.

There was a particular issue with Our Lady of Lourdes in Drogheda. The use of symphysiotomy began to die out in Ireland in the 1960s, because of improvements in women’s health, the increased use of lower section Caesarean sections, drugs to shorten labour, and changed medical views as to when intervention was necessary.

However, up to the 1980s the Drogheda hospital continued to use the procedure. The founding obstetrician, who was a firm believer in carrying out symphysiotomies in the hope of avoiding Caesarean section, created an ethos which was “unswervingly Catholic”, a later report on the issue concluded.

In 2012 LM (one of the women who took a case to Strasbourg) initiated proceedings in the High Court seeking damages.

However, the court rejected her claim that there had been no justification for her receiving the procedure, given the medical belief at the time that symphysiotomy was a relatively benign procedure, the concerns for the safety of her child, and the view that some form of surgical intervention was required if the birth was to proceed safely.

Meanwhile, in 2011, the Department of Health had commissioned a report from Prof Oonagh Walsh of UCC, on symphysiotomy in Ireland.

In two subsequent reports she noted symphysiotomies were rarer than Caesareans in the 1944 to 1992 period, and that the lack of fertility control options were part of the background to the use of the procedure in this jurisdiction.

She noted that at the time the economic situation of many families was “dire”, and the poor condition of many women created dangers in terms of their being given a general anaesthetic.

A subsequent report by Judge Yvonne Murphy, which was published at a time when there were 150 sets of proceedings lodged in the High Court, recommended an ex gratia scheme, which the State in time established.

The scheme was administered by Judge Maureen Harding Clark, who approved awards to almost 400 of the almost 600 women who applied.

She concluded in a report in 2016 that no general pattern of immediate or developmental injury could be discerned from the applications reviewed.

“The majority of applicants who underwent symphysiotomy made a good recovery and went on to have normal pregnancies and deliveries and lead a full life,” the Strasbourg court said of her findings.

These views were supported by international studies of the use of the procedure.

The three women who took cases to Strasbourg did not seek to access the ex-gratia scheme, which involved awards of €50,000 to €150,000, with the lower award being for women who had received the procedure, and had suffered little or no subsequent injury.

The steps taken by the State in response to the controversy were among the reasons why the Strasbourg court decided that the claims before it that Ireland had contravened sections of the European Convention on Human Rights in relation to the issue of symphysiotomy were “manifestly ill-founded”.