One person still being questioned about killing of Aidan McMenamy 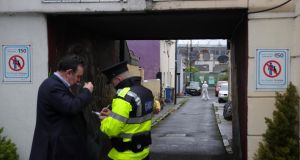 Gardaí at the scene of a fatal stabbing on Clinchs Court, North Strand, Dublin on Friday. Photograph: Colin Keegan/Collins

A man killed in a knife attack in Dublin’s north inner city has been named as Aidan McMenamy.

The 45-year-old victim was stabbed to death at 4am at Clinchs Court, North Strand, Dublin 1 on Friday morning.

Gardaí­ were called to the scene, where the man was found seriously injured. He was taken to the Mater Hospital for emergency treatment but later died.

A second man, also aged 45, who was also injured and taken to St James’s Hospital with non-life threatening injuries was arrested.

He remains in garda custody where he is being questioned about the killing.

Results of a post mortem examination due to take place on Friday have not been released.

The arrested man is being detained at Mountjoy Garda Station under Section 4 of the Criminal Justice Act 1984.

The stabbing took place in or around a home on the street, and gardaí­ believe the incident is not feud related.

The scene was closed off for a time on Friday as officers from the technical bureau examined the area for evidence.

State Pathologist Dr Margaret Bolster was due to carry out the post mortem examination.

Gardaí are appealing to any witnesses who may have been in the area between 3am and 4:15am on Friday to contact them.