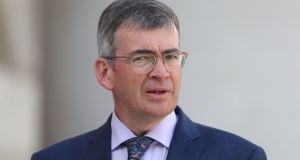 Drew Harris is to become the Garda commissioner in the early hours of Monday. Photograph: Niall Carson/PA Wire

Drew Harris is to become the Garda commissioner in the early hours of Monday.

The former PSNI deputy chief constable and RUC officer will be sworn in shortly after midnight during a private ceremony at Kevin Street Garda station in Dublin.

He will have to recite a declaration stating: “I, Jeremy Andrew Harris, hereby solemnly and sincerely declare before God that I will faithfully discharge the duties of commissioner of An Garda Síochána with fairness, integrity, regard for human rights, diligence and impartiality, upholding the Constitution and laws according equal respect of all people.

“While I continue to be commissioner, I will to the best of my skill and knowledge discharge all my duties according to law, and I do not belong to, and will not while I remain commissioner, form, belong to or subscribe to, any political party or secret society whatsoever.”

A Garda spokesman said Mr Harris would be attested by a Peace Commissioner and would have to sign the Garda Code of Ethics and the Official Secrets Act.

Mr Harris succeeds acting commissioner Dónall Ó Cualáin, who took over from Nóirín O’Sullivan following her retirement from the force last September. Mr Ó Cualáin will step down one minute after midnight and Mr Harris will then take up the role.

Ahead of Mr Harris taking on the role concerns have been raised about the appointment of a commissioner from outside the force and State.

Minister for Justice Charlie Flanagan on Sunday rejected criticism of the appointment of Mr Harris, saying much of the negativity was politically motivated.

After his selection for the job, Sinn Féin leader Mary Lou McDonald said Mr Harris had to earn trust and “demonstrate he in no way subscribes to the toxic, vindictive policing culture which necessitated the disbanding of the RUC”. Some in Sinn Féin resent Mr Harris because of the 2014 arrest of Gerry Adams, in connection with the 1972 disappearance and murder of Jean McConville.

He said that from Monday Mr Harris would be subject to the same legal regulations as any other member of An Garda Síochána and that he was satisfied with the vetting process completed.

“That was done before the Independent Policing Authority nominated him for appointment by government and before I brought that recommendation to my Government colleagues,” he told RTÉ’s This Week programme.

“He is noted very much for impartial policing and to service and community and he defended the democracy on the rule of law all of his professional life. His father was brutally murdered by enemies of democracy.”

Mr Harris comes from a policing family and his father, RUC supt Alwyn Harris (51), was murdered in an IRA bombing in 1989 at the height of the Troubles near the family’s home in Lisburn.

Mr Flanagan said “the greatest threat” to State security was posed by dissident republicans and Mr Harris had “played an important role” in ensuring a positive relationship between the PSNI and An Garda Síochána, which he said could strengthen as a result of the appointment.