Garda Commissioner responds to criticism saying: ‘I am Irish’

‘I’m not sure how much of an outsider I am really . . . I’m from the island of Ireland’ 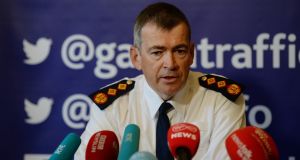 Garda Commissioner Drew Harris believes some of the criticism about him joining the Garda from the PSNI has been personal and he questioned how much of an “outsider” he was.

Asked by The Irish Times what he would say to people concerned that somebody from outside the jurisdiction, and who was the PSNI’s contact officer with MI5, was now the Garda Commissioner, he said he had taken on his new role “in good faith”.

“I’m motivated. I’m here to protect the people of Ireland. And I’m here to lead An Garda Síochána in that mission,” he said.

“As a [PSNI] police officer I had a responsibility in law to prevent and detect crime and that involved the sharing of information.

“Yes, I had a role working with the security service. But that was always against the requirements of me under the Police Act as pertains in Northern Ireland. ”

Mr Harris, a former PSNI deputy chief constable, was sworn in as a garda and assumed the post of commissioner just after midnight on Monday morning.

When appearing to meet the media today, he sat alone before about 40 reporters, cameramen and photographers.

“Why I’m sitting here on my own is that so much of the commentary over the last two months has been of a personal nature,” he said.

“And I felt it was unfair then to bring my colleagues along into that. These were specific issues I wanted to address alone.”

He also questioned whether he was an “outsider”.

“I am Irish. And I’m not sure how much of an outsider I am really. I’m a police officer, I’ve joined a policing organisation, I’m from the island of Ireland.

“I’ve always worked for the benefit of the people of Ireland. And I’ve worked very closely with An Garda Síochána.”

Asked whether he had information from his time in the PSNI about historical atrocities during the Troubles that he could now pass on to the Garda, he replied he did not believe this was the case.

Intelligence, much of it “very sensitive”, was always passed between the Garda and PSNI and had both prevented and solved terrorism and other serious crimes, he said.

“The matters I was aware of were always dealt with properly in terms of the sharing of intelligence,” he said.

Pressed on whether there was any further intelligence on historical crimes that he had not shared before but he could now share he said: “No; is the short answer to that.”

He also disputed an assertion that Garda morale was at an all-time low, saying issues like more transparent promotion competitions and better uniforms were already being addressed.

He said he would focus on protecting the vulnerable, including people subjected to domestic violence and organised crime.

“Crime is not like rain, it does not fall evenly on us all. Crime is particularly hard and particularly prevalent on those who are vulnerable in our society,” he said.

Mr Harris said he was determined to lead the Garda as efficiently as he could.

The first step towards achieving that was gathering knowledge about how current resources were being used.

“We need to understand where our people are,” he said, adding assessing the skills level and requirements in the Garda was also crucial.

But he insisted he would, as he called it, “speak truth to power”; speak up honestly to Government if more resources were needed.

However, he believed the Garda was generally well-sourced. He accepted the suggestion the Garda had already incurred an overspend of some €30 million this year and would look at bringing that back in line with available budgets.

Mr Harris had previously been the PSNI’s main contact point with the British security agency MI5.

And he also gave evidence to the Smithwick Tribunal in 2012, telling it intelligence suggested Garda members had colluded in the 1989 murders of two RUC officers shortly after leaving Dundalk Garda station.

On his controversial evidence to the Smithwick Tribunal six years ago, he said he gave his evidence on behalf of the PSNI and faced lengthy cross-examination.

The Tribunal concluded there had been collusion by unknown Garda members in supplying information that aided the IRA ambush the officers just north of the Border on the day in question.

He said he was aware of the Kinahan-Hutch feud, saying it was a domestic and international problem. The Garda operation would reflect that; working nationally and with international partners.

The Garda had already achieved key successes against those involve and would continue to work to “degrade” the gangs.

On the issue of Brexit, he was mindful that differences in taxes and tariffs on both sides of the Border may play into the hands of organised crime; namely smuggling.

Dissident republicans still posed a threat and was a bigger issue than the threat from international terrorism, he said.