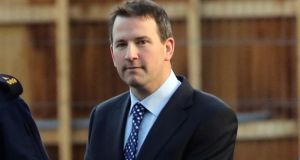 Graham Dwyer was jailed for life for the murder of Elaine O’Hara. Photograph: Collins Courts

The lawyer who helped put murderer Graham Dwyer behind bars for life for the murder of Elaine O’Hara received over €100,000 for his work on the case.

Figures released by the Director of Public Prosecutions in response to a Freedom of Information request confirm that Seán Guerin SC received €101,726 (all figures include 23 per cent VAT) for his work in securing Dwyer’s murder conviction.

Mr Guerin built up the State’s case during the 43-day trial over nine weeks culminating in him describing Dwyer as “a sadistic and brutal pervert with nothing on his mind other than murder” in his closing speech.

The figures released show the DPP paid €237,749 to the three barristers on the State prosecution team for the trial and court appearances relating to the case going back to October 2013.

The overall legal bill for Dwyer’s legal team would be even higher leaving an overall bill to the tax-payer to pay for the lawyers in the trial well in excess of €500,000.

Mr Dunphy was paid through the criminal legal aid scheme while the pay for the solicitor representing the DPP is not included as s/he is a salaried State employed solicitor.

In prosecuting and defending cases in the Central Criminal Court for murder trials, senior counsel receive a brief fee of €7,127 that covers preparatory work and the first day and a daily refresher fee of €1,562.

Junior counsel prosecuting and defending murder cases in the central criminal court received a brief fee of €4,752 and a refresher fee of €1,041.

Combined figures provided by the DPP and the Department of Justice show that Mr Guerin and Mr Farrell last year received a total of just over €465,993 for their state work in the criminal courts.

The majority of Mr Guerin’s work in the criminal courts is done on behalf of the DPP and the figures show he received €135,509 for prosecuting cases last year. This compares to the €84,225 Mr Guerin received in defending accused persons in the courts in 2014.

Figures released by the DPP show that Mr Guerin’s work on the Dwyer murder trial made him the third best paid prosecutor in the country in the first quarter of this year.

Between January and the end of March, the DPP spent €3.73 million on barristers’ fees with Brendan Grehan SC receiving the top amount of €127,855 and Una Ní­ Raifeartaigh SC receiving the second highest amount at €127,064.

Both barristers represented the DPP in the long running Mark Nash murder trial who was convicted last month for the murders of Sylvia Sheils (59) and Mary Callanan (61) at their sheltered housing in Grangegorman in Dublin in 1997.