Jason Clancy, whose complaint against sports coach led to investigation, ‘delighted’ with news 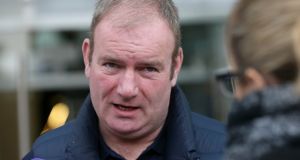 Jason Clancy, one of the survivors of Bill Kenneally’s abuse: “I firmly believe that what we uncovered is only the tip of the iceberg in relation to this.” Photograph: Collins Courts

Survivors of abuse by Bill Kenneally have welcomed the Government’s announcement of a Commission of Investigation to investigate the handling of complaints against the sports coach.

Jason Clancy, whose complaint against Kenneally in 2013 led to a Garda investigation, said that he and the other survivors were delighted with the news. In 2016, Kenneally was convicted and sentenced to 14 years for abusing 10 boys in Waterford in the 1980s.

“We are very happy Minister for Justice Oliver Flanagan has obtained Cabinet approval to appoint retired circuit court judge Barry Hickson to chair this commission of investigation, and hopefully it will be able to start taking evidence within a matter of weeks,” he said.

Mr Clancy said that the survivors were satisfied with the terms of reference that Mr Flanagan brought to Cabinet for the inquiry.

It emerged at Kenneally’s sentencing hearing in 2016 that two senior gardaí in Waterford, Supt Sean Cashman and Insp PJ Hayes, were told in 1987 that Kenneally had abused another boy, but they never investigated the matter as no formal complaint was made.

The two senior gardaí spoke to Kenneally after contact was made with him through his uncle, the late Waterford Fianna Fáil TD, Billy Kenneally, and Kenneally gave an undertaking to gardaí to go for counselling and treatment for the abuse of the boy.

Mr Clancy said that he expected upwards of 50 witnesses could be called to give evidence before the inquiry.

He said that he and other survivors had also furnished Mr Flanagan with the names of other boys, now men, whom they believed could assist the commission of investigation with its work.

“We have uncovered a lot of stuff but I firmly believe that what we uncovered is only the tip of the iceberg in relation to this.”

Mr Flanagan said the terms of reference approved by Cabinet will now go to the Dáil and Seanad for approval, which he said would be “early the week after next”.

“Then the terms of reference can be given to Judge Barry Hickson and he can commence work within weeks,” Mr Flanagan said.

Mr Flanagan said that there were “unique circumstances” relating to the commission “insofar as there are a number of criminal trials still outstanding. It could well be that more people will now come forward now that the commission has been established,” he said.

“Obviously every effort needs to be made to ensure that the commission doesn’t engage in anything that might cut across the Garda investigation or the criminal proceedings that are under way.”

Kenneally is currently before Waterford Circuit Criminal Court on 99 new charges of abusing three boys in Waterford in the 1980s, and Mr Flanagan said that it was important his right to a a fair trial would not be not prejudiced by the Commission of Investigation .

“As Minister for Justice, I am particularly conscious of the importance of ensuring the Commission does not impact upon any pending criminal prosecutions and, accordingly, I have consulted with the Attorney General and the DPP who will monitor the commission proceedings.