Keelings says it can save fruit crop without additional workers 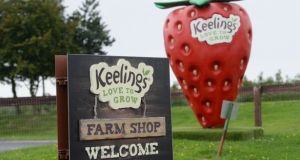 Keelings said it was proud of its relationship with its seasonal employees. Photograph: Alan Betson

Dublin fruit and vegetable producer, Keelings, has said it believes it can save most of its fruit crop this year without the employment of additional workers from outside the State.

There was a significant controversy last month when the company flew in almost 200 agricultural workers from Bulgaria on a chartered flight from Sofia.

Farming is considered an essential service in terms of the lockdown regime and farm workers are allowed travel within the EU during the pandemic.

In a new statement on its website, Keelings said it acknowledged the understandable concerns raised by the arrival of the workers to pick fruit on the north Dublin farm.

It said that in late March, in order to ascertain whether it could save the harvest with locally-recruited employees, it advertised in Ireland, but that as of April 16th it had attracted only 27 domestic applications, which fell significantly short of its labour needs.

“Given the level of publicity over the last number of weeks we have had additional applications and other offers of help,” it said.

“We are focused on processing current applicants and believe that we will have enough people available to us to save most of our fruit harvest. We do not plan to recruit further horticultural workers from outside Ireland in the coming months.”

The company said it had issued the new statement to address “repeated misleading and speculative statements” that had been made.

It said it was an Irish-owned family business that has been growing and packing fruit and vegetables for the Irish market since the 1920s. It currently employs more than 1,700 people in growing, harvesting, importing, packaging and other roles.

Between April and October, it employs approximately 900 temporary horticultural workers to harvest crops.

The company said it helps these workers find accommodation across a number of locations and provides bus transport to the farm at St Margaret’s each working day.

“We offer a limited number of rooms at residences on our farm but accommodation is mainly sourced by arrangement with external providers. We work tirelessly to ensure this accommodation offers a comfortable living standard, complies with all regulations and is affordable.”

The current cost per employee varies between €95 and €100 per week, it said. Typically, the workers are accommodated in “apartment or house style accommodation with three or four bedrooms and two to three beds per room. However, during Covid-19, we have applied a maximum capacity of two people per room.”

Some foreign workers live in larger shared residential accommodation, it said. They too have a maximum of two people per bedroom during the pandemic and share “spacious communal areas”.

On March 14th, the Health Protections Surveillance Centre (HPSC) advised that people using communal facilities (eg recreational areas) should mix in groups of less than 50 persons. This advice was shared with all the workers.

On April 15th, the guidelines were updated by the HPSC to restrict communal areas social mixing to groups of less than 20 persons where social distancing can be observed. Again, all workers were advised of this update, the company said.

“All of our staff are subject to the same restrictions in public, in the interests of public health, that apply to all persons resident and working in Ireland, and are provided with training and information to ensure they understand the implications of these rules.”

The 189 workers who were flown in from Sofia on April 13th had been health screened before departure and were taken straight to their housing upon arrival, on private buses, where the began 14 days of restricted movement, the company said.

“During this time, they had groceries and essentials delivered to them and they were paid for this period. They were subject to further medical screening immediately before commencing work on the 29th of April.”

The company said it complies fully with all Irish and EU employment law, including the minimum wage law.

The company said it was proud of its relationship with its seasonal employees. Typically, 70 per cent of them asked to return from one year to the next and some had been coming to work for Keelings for more than 10 years, it said.

“We are proud to play our part in growing, harvesting and delivering fresh, healthy fruit and vegetables and our role as a major employer.”