Irishman stranded in Finland during Covid-19: ‘I feel safer here’ 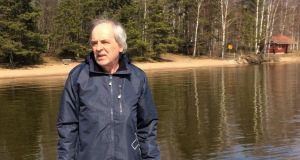 Dubliner Eamonn Cronnolly on a walk around Lake Immala in Finland: ‘I came here with only a cabin bag’.

My wife and I walk by Lake Immala in Finland, which is large enough to have a sandy beach and stretches to the Russian border. The silence is broken only by the ice cracking and woodpeckers hammering in the trees.

I came to South Karelia in early March with only a cabin bag as I was intending a short stay. Little did I know at the time that I’d still be here almost two months later. I’m originally from Dublin and my wife is from Finland, and she has a small place outside Imatra, a town near the Russian border.

We usually come to Finland at this time of the year because it’s at its best for cross-country skiing with everywhere covered in snow and good ski tracks through the forest and across the frozen lake.

Less than a week after I arrived my daughter called to insist I stay put and not risk travelling back to England, where we live normally. She should know how serious the coronavirus outbreak was getting as she lives in Madrid, Spain - one of the worst hit countries with Covid-19. My age, being more than 65-years-old, and my medical history puts me in the high risk category. My daughter argued the flight back would be too risky and Finland was much better placed to cope with the crisis.

The population is about 5.5 million and healthcare is good. Back in the UK, news sites reported predictions the National Health Service (NHS) could struggle to cope as the cases of coronavirus surged. My wife and I have lived and worked in Sheffield for the past 25 years. I studied architecture in Ireland and moved to London for work after graduating where I met my Finnish wife. We moved to Sheffield in 1994 where I taught “green” architecture, an environmental approach to building design to minimise carbon emissions and resource depletion, in the two universities in the city. We have two daughters. Now retired, my wife and I spend more time in our respective native countries, Finland and Ireland.

In the beginning of the crisis, I put up the “it’s just another flu” argument, which prevailed in the first week of March. But things developed fast as understanding of the virus spread across Europe and I changed my mind about the virus’s seriousness. First people in Finland were advised to work from home, then not to travel, and then most shops, and public buildings were closed.

The neighbours, Sweden, have taken a more relaxed approach but Finland closed its borders and travel to the country was suspended until May 13th, with the exception for Finnish citizens and foreigners with permanent residence allowed to return.

A week was a long time in the ramping up of restrictions. Ireland seemed to take a stricter course, with school closures and later a “lockdown” with a 2km limit. Here schools were closed some weeks later, after much debate. The exception was for children of essential workers who could be sent to specially arranged care.

Restaurants closed but sell take-away food, and supermarkets opened at 7am for the elderly. There is no lockdown but social distancing is rigorously practised. The village pub and community sauna on the estate are closed indefinitely.

In Imatra, mega stores and supermarkets were built to cater for the large influx of Russian shoppers that have travelled across the border. The border is now closed and so the stores are almost empty. But due to huge size of the supermarkets, there is no issue of not having enough space to social distance so it feels safe to go shopping.

From what I’ve observed, Finns are good at practising social distancing - maybe as it’s a country with much wilderness, physical space and cold climate. Public spirit is strong so when the government issues directives, they are adhered to by the vast majority. I think the country has got it right so far as it has some of the lowest casualties in Europe. At the time of writing there have been more than 5,000 confirmed Covid-19 cases and about 220 deaths.

This new young government is a revelation to me. I watch them every day on television giving detailed briefings calmly and without the hubris and bravado that I’ve seen in Westminster briefings. Finnish prime minister Sanna Marin is 34-years-old - the world’s youngest sitting prime minister. The majority of the 12 cabinet members are women. Three of them are also under 40. The people feel reassured by this government and it is significant the country is deemed happiest in the world three years running. The prime minister has high ratings among the voters.

At the daily briefings each minister outlines in precise detail the steps being taken in their department in response to the crisis, whether employment, healthcare, travel, welfare or education. Questions are taken at the end from journalists, these days read out rather than in person. They are answered with careful consideration and a very Finnish candour. The strategy is made clear in every sector.

The spring advances quickly here after the equinox. The lakes are open and the last patches of snow have melted in the forest shade. The days grow longer and brighter. There are acres of wilderness for trekking, and tree-lined cycle paths off road.

My wife and I had planned to be in a cottage in the west of Ireland by now, between Westport and the Sheeffry Hills in Co Mayo. This will not happen given the travel restrictions. We could travel back to the UK but I’m happy I stayed for a few reasons. My wife had initially planned to stay here longer than I so if I’d flown out as planned, just before the border was closed, we would have been separated for months on end - both vulnerable and alone.

There is also so much space in this sparsely occupied region of South Karelia, social distancing is second nature to the people here but no need for lockdown restrictions. The population of Imatra is about 28,000 unlike back in Sheffield, which is much more densely populated at more than 500,000. We can move around, cycle and trek. I’m using this unplanned stay to watch the seasons change so fast, the lake thaw and the days grow bright.

But we are a family of four stranded in three countries. Our eldest daughter is still under lockdown after five weeks in Madrid and our youngest is living in Manchester. We have regular video calls together to keep in touch. Like so many families in the world, we wonder when we will meet again, and where it might be - Sheffield, Mayo or Madrid.