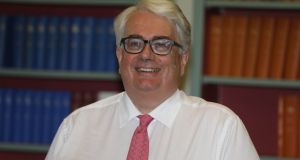 Supreme Court Judge, Mr Justice Frank Clarke pictured in the Four Courts after the announcement that he is to be appointed as the new chief justice. Photograph: Collins Courts

Most young barristers have to wait years for a meaty case to arrive on their desk. Frank Clarke was qualified less than a year when one of the biggest constitutional cases of the 1970s landed in his lap.

When an 18-year-old Dubliner named John Healy was given a six-month sentence for stealing a car in December 1974, his mother went to a Free Legal Advice Centre (Flac) in Tallaght to ask for help. It was Healy’s second conviction that year. In June, he had pleaded guilty in the District Court to breaking into a south Dublin rugby school and stealing property valued at £18.10. He did not apply for legal aid and was not told that he could do so. When he came before the same court in December on the car-stealing charge, he was granted legal aid but his solicitor didn’t turn up for the trial, as solicitors had at the time withdrawn from the legal aid scheme in protest at cutbacks. He was convicted without legal representation.

The volunteer who greeted Mrs Healy at the Flac centre in Tallaght that day was a law student named John Mac Menamin. Realising that Healy’s situation had the makings of a significant constitutional case, he called Frank Clarke, his old friend from UCD, who was a year older and recently qualified. Clarke got in touch with the barrister Ercus Stewart, who in turn approached Rory O’Hanlon, one of the leading constitutional lawyers of the day. The case, known to every law student today as Healy v Donoghue, was rejected in the High Court but succeded in the Supreme Court, which declared for the first time a constitutional right to free legal aid.

Young barristers born into legal families can always count on a few briefs coming their way. Everyone else needs a bit of luck to get started. The Healy case showed that Clarke, the son of a customs official from Drimnagh and the first member of his family to go to college, at least had that on his side. But as he made his way through the strange, vaguely otherworldly environment of the law library, it was his talent that shone. Numerate as well as literate – he has a degree in maths and economics – Clarke was an all-rounder at the Bar, building a lucrative practice that made him a regular in some of the big constitutional and commercial cases of the 1980s and 90s. He was twice appointed by the Supreme Court to present arguments on Bills referred to it by the president. He also acted as counsel to the Public Accounts Committee during the “Dirt inquiry” and was external counsel to the Laffoy and Ryan inquiries into child abuse.

In 1993, he was elected chair of the Bar Council, the body that represents barristers.

Clarke’s family had no party politics, but in the summer before going to UCD, inspired by the Just Society vision of Declan Costello – a man he would cite as an influence throughout his career – Clarke joined his local Fine Gael branch and canvassed for Jim Mitchell. Some of his friends from UCD, notably Michael McDowell and Adrian Hardiman, would later gravitate towards the Progressive Democrats. But Clarke stuck with Fine Gael. Like Mac Menamin, who would end up beside him on the Supreme Court, he advised Garret FitzGerald, and was election agent for the former Fine Gael TD George Birmingham, now a judge on the Court of Appeal. He also ran unsuccessfully for the Seanad in the 1980s – continuing the inglorious pattern set by his doomed campaign for the auditorship of the Literary and Historical Society a decade earlier, when he was comfortably beaten by Hardiman (a fact Hardiman, later a colleague on the Supreme Court, never tired of sharing).

As a judge – on the High Court from 2004 and on the Supreme Court since 2012 – Clarke gained a reputation for fair-mindedness and authority, and for judgments that were incisive and clear. His years on the Commercial Court, as the fallout from the economic collapse wound its way through the Four Courts, left a trail of influential judgments that remain works of reference. His output in general was prodigious – one colleague calls him a “judgment-writing machine” – but he was also funny and didn’t seem to take himself too seriously. Barristers would be unnerved by his habit on the bench of flinging a pen a foot into the air so fast that it would rotate twice before landing upright and snug between his thumb and forefinger. It was mesmeric, but did it mean he was bored or enthralled?

Clarke’s record as a judge, like that of his influential colleague Donal O’Donnell, shows a willingness to innovate and think anew about old problems. Indeed, some judges felt that if the long Fine Gael link did not count against him becoming chief justice, then his willingness to take decisions that rocked the boat could have done. He gave the sole dissenting judgment on a seven-judge Supreme Court in a landmark surrogacy case in 2014. Asked whether the genetic mother of twins born to a surrogate could be registered as their mother, Clarke alone concluded that, in the absence of a definition of the term, “mother” applied equally to a birth mother and a genetic mother.

A year earlier, in the Marie Fleming case, the court rejected the argument that there was a right to assisted suicide. That came under the one-judgment rule, so it is not known if there were any dissenting views, but given Clarke’s line of questioning at the hearing it would be no surprise if he argued in private for the alternative result, which would have been considered within the current judiciary quite a radical position. On asylum he has taken a liberal position – one that culminated in the recent decision, written by O’Donnell for the court, that declared the absolute ban on asylum seekers working to be unconstitutional.

On criminal law, Clarke and O’Donnell forged an axis in trying to moderate the more absolute pro-defendant stance of Hardiman - often earning them the disapproval of their late colleague and friend. Clarke has relatively little time for the idea of letting charges fall on purely technical grounds that don’t go to the question of guilt or innocence. But he draws a line beyond that. So, for example, both Clarke and O’Donnell opted to quash an attempted rape conviction on the grounds that suspects who request a lawyer cannot be questioned by gardaí until they get that legal advice (Gormley v White). But both judges joined the majority in a 4-3 decision that overturned a 25-year-old Supreme Court ruling on the so-called exclusionary rule (DPP v JC). The decision meant the court relaxed the long-standing rule that barred the State from using evidence obtained in breach of a constitutional right, regardless of whether or not the breach was deliberate.

A big part of Clarke’s new role will concern reform of the courts itself – one of the areas in which outoing chief justice Susan Denham leaves a substantial legacy. On this Clarke has also hinted at a certain radicalism. In a speech at UCC in 2015, he questioned whether court procedures were “fit for purpose” in the modern world and suggested they worked in the interests of the richest litigants.

Clarke, who will be 66 in October and so will serve four years at the head of the judiciary, has emerged from an exceptionally strong pack. Two of those widely mentioned as having been shortlisted for the role, O’Donnell and Peter Kelly, are also among the most accomplished judges of this or any other era.

The question now is how Clarke could seek to reshape the Supreme Court. Look out for the markers he has laid out in his judgments. In the surrogacy case, for example, he remarked that “there may be circumstances where the courts are required to develop common law principles to meet new scientific circumstances” – a view that Hardiman saw as indicating a strikingly expansive view of the courts’ power. More recently, in the Persona case this year, he noted problems with access to justice and said that if it was shown to be so bad as to deny the constitutional right or access, courts would have to step in.

There are many more such markers left by Clarke and the members of the court he will now lead. Watching which they pick up, and where they go with them, will be the story of the coming years.