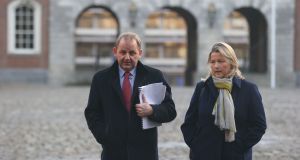 Maurice McCabe and his wife Lorraine at the Disclosures Tribunal at Dublin Castle. Photograph: Stephen Collins/Collins

The barrister representing former Garda commissioner Nóirín O’Sullivan decided in 2015 that Garda whistleblower Sgt Maurice McCabe had a “strong motivation” to denigrate the character and reputation of two Garda officers against whom he made complaints, the Charleton tribunal has heard.

The view about Sgt McCabe was expressed in a letter written during the hearings of the O’Higgins Commission which sat in private to investigate complaints made by the sergeant.

During the hearings a row erupted over whether the legal team representing the then Garda commissioner and senior Garda officers should be allowed attack Sgt McCabe’s motivation in making complaints.

The tribunal heard that in a letter sent by Colm Smyth SC to his solicitor in July 2015, he expressed the view that it was becoming “increasingly obvious” that Sgt McCabe “has a strong motivation to denigrate the character and reputation of chief superintendent Michael Clancy and superintendent Noel Cunningham.” The full content of the letter was not disclosed at the tribunal.

The tribunal also heard that solicitor Annmarie Ryan of the Chief State Solicitor’s Office discussed the issue of raising Sgt McCabe’s motivation with the Attorney General’s Office and afterwards noted that the issue was “political dynamite”.

The attorney general’s view was that it was not going to second-guess the views of the legal team representing the Garda commissioner.

The tribunal has heard that in the week that the commission hearings were due to begin in May 2015, the legal team representing Ms O’Sullivan and senior officers were briefed about matters concerning a 2006 sex abuse allegation made against Sgt McCabe.

The allegation was investigated by Supt Cunningham and the Director of Public Prosecutions decided no charges should be brought. The DPP also noted that even if the allegations, which were contested, were true they would not constitute an assault.

Requests from Sgt McCabe that the full nature of the DPP’s view be released were refused. The tribunal has heard some senior officers believed the refusal to release the DPP’s decision led to Sgt McCabe developing a grievance, something he denied during the commission hearings.

Ms Ryan told the tribunal Garda management wanted all matters arising from the complaints by Sgt McCabe, matters that had been going on for years, to be heard by the commission chairman, Mr Justice Kevin O’Higgins.

Garda management wanted the judge to hear all the evidence, Ms Ryan told Diarmuid McGuinness SC, for the tribunal, “so he could get to the truth, put it all out and get to the bottom of it”. They wanted the commission to “deal with it all and come to a conclusion”.

Sgt McCabe’s counsel, Michael McDowell SC, strongly objected at the commission to Sgt McCabe’s motivation being raised and sought confirmation that counsel was following the then commissioner’s instructions.

The tribunal is investigating whether the sex abuse allegation or any inappropriate matter were relied upon at the commission in an attempt to discredit Sgt McCabe.

The tribunal chairman, Mr Justice Peter Charleton, has noted that usually the questioning of a person’s credibility only arises when there is a conflict of fact. However, the O’Higgins Commission was mainly investigating operational policing matters with which the sergeant had not been involved.

The tribunal heard that on May 18th, 2015, Mr Justice O’Higgins ruled that it could be said that Sgt McCabe might have had a “grievance” but that the matters to do with the DPP’s report could not be raised.

However, in a legal submission to the commission on June 11th, 2015, Ms O’Sullivan’s legal team returned to the issue of Sgt McCabe’s motivation and the DPP’s finding on the discounted sex abuse allegation. The tribunal will continue to hear evidence from Ms Ryan on Thursday.