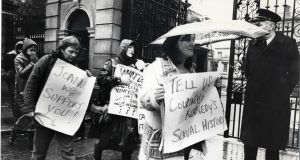 A blood sample at the centre of the Kerry Babies case was stored for 34 years until such time as scientific developments allowed for comprehensive DNA testing,the Director General of Forensic Science Ireland has explained.

A murder inquiry into the discovery of a baby boy on a beach outside Cahersiveen in Co Kerry more than 30 years ago has begun, following a Garda apology to Joanne Hayes. Ms Hayes was wrongly charged with the murder of “Baby John”, who was found with 28 stab wounds, on White Strand in Co Kerry on April 14th, 1984.

Quickly known as the Kerry Babies case, Garda investigators at the time had suspected Ms Hayes, from Abbeydorney, about 75km from the beach, had given birth to the baby and killed him. A DNA test carried out late last year into Baby John, who was about five days old and had been dead for two days, proved she could not have been the mother.

Dr Geraldine O’Donnell said they kept the blood sample from 1984 in anticipation of scientific developments.

She told RTÉ’s Today with Sean O’Rourke show that Forensic Science Ireland was approached by the Garda Serious Crime Review team towards the end of last year and asked to see if it was possible to generate a DNA profile for Baby John.

“We can now go back to very old samples, even samples that are not of good quality, because technology is now more sensitive,” she said.

A blood sample on its own would have degraded over the 34 years so it was applied to cloth, then dried and frozen, said Dr O’Donnell.

DNA profiling is now very accurate and detailed, she added and parentage can be proved directly, she added.

Statistical methods have improved and it is now possible to establish relationships between siblings even if not with the same certitude as parents, said Dr O’Donnell.

A “serious crime review” investigation has now begun in the case, but it has already been established that there is no match between Baby John and anyone whose DNA is held on the State’s DNA database. Det Chief Supt Walter O’Sullivan said a serious crimes review team, comprising a detective sergeant and four detectives backed up by another ten or so detectives from Kerry would begin identifying people to approach and ask for DNA samples in a bid to try and identify relatives of Baby John, and he hoped people would co-operate with gardaí.