One of Ireland’s most prominent barristers, who fought high-profile constitutional cases 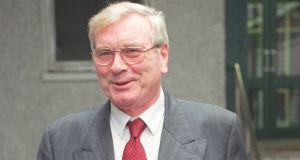 One of Ireland’s most prominent barristers Garrett Cooney has died following a short illness.

Although he acquired a reputation as a leading practitioner in defamation proceedings, Mr Cooney (84) practised across a range of legal fields during a career spanning 45 years.

“He was rightly regarded as an expert in constitutional, defamation and personal injuries law who built up and commanded an enormously successful practice,” said Mícheál P O’Higgins SC, chairman of the Council of The Bar of Ireland.

“Garrett had an immense presence in court. He possessed a deep and powerful voice which he used to good and sometimes intimidating effect.

“He was regarded as one of the finest cross examiners in the Law Library. He acted for plaintiffs and defendants alike and was always meticulous in his preparation for court. He was a serious heavyweight at the Bar.”

Mr Cooney, who died in Dublin on Monday, was originally from Co Longford. He was called to the Bar in 1960 and appointed senior counsel in 1977. He went on to establish himself as a leading figure in Irish legal circles. He was a brother of former Fine Gael justice minister Pat Cooney.

As well as in defamation and personal injury cases, Mr Cooney also had a role in a number of leading constitutional cases.

“He acted in the Hanafin referendum case challenging the outcome of the Divorce Referendum in 1995. Slightly more to the left, he acted alongside Mary Robinson and the late Paul Carney for David Norris in his challenge to the law criminalising homosexuality,” Mr O’Higgins said.

Known affectionately as “the Coon”, as far back as the Flood Tribunal he was widely regarded as an elder statesman of the legal profession. He was considered very well read in law and in literature, and considered a formidable opponent.

One legal source reflected: “He would be somebody to be wary of if he was on the other side, largely because he was a fearsome opponent. He was an old-style barrister that you don’t get much of anymore.”

In a distinguished career, Mr Cooney was prominent in his representation of the Murphy Group at the Flood Tribunal where, in 1999, his clashes with the chairman Mr Justice Feargus Flood, were well publicised.

At one point in the proceedings, Mr Justice Flood told him: “I really do object to this constant barrage which I have been subjected to by you.”

Mr Cooney replied: “I am making what I think is a valid submission on behalf of my clients, and I would respectfully ask you not to take it personally.”

In terms of high-profile defamation cases, he represented three plaintiffs in a major libel action in 2005 arising from coverage of the Catherine Nevin trial. He acted for former Fianna Fáil press secretary Mandy Johnston in an unsuccessful legal action against the Star newspaper in 2004.

In 2002, he acted for former Irish rugby coach Mick Doyle who sued the Sunday Independent over an article which stated that within two seasons of winning the 1985 Triple Crown, he had become ostracised among players.

Mr Cooney, who died at St James’s Hospital, was married to Sheila and a father of four: Garrett, Stephen, Kevin and the late Jeananne.

His removal will take place on Thursday to St Kevin’s Church on Harrington Street. Funeral mass will be on Friday morning before his burial at Mount Jerome Cemetery.