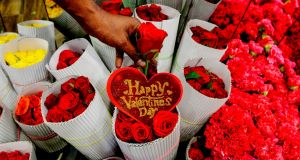 There were 75 cases of “romance fraud” reported to gardaí last year by victims who had lost a total of more than €1 million to scammers.

The Garda issued the figures ahead of Valentines Day as they warned the public to be aware of scams which involve luring victims into fake online relationships and then asking for money.

Vulnerable people are often targeted and persuaded to hand over money “until the victim has no more money to give or realise they are being conned,” the Garda said.

“Some of them are maybe a bit more vulnerable because they’ve fallen out of another relationship or someone has died. And they’re just looking for someone to share their life.

Scammers can spend months gaining a victims trust before asking for money he said.

In one case an Irish woman was lured into a relationship with a man she met on a dating site. He gained her trust and she sent him a total of €62,000 over a period of time.

In another case a male victim met a woman in an online chat room who persuaded him to send her €50,000

After meeting a victim on social media or on a dating app, fraudsters will typically ask for small amounts of money at first before asking for larger amounts to meet specific expenses such as travel costs to come meet the victim.

Requests for money for moving expenses, medical costs for a sick child or to pay a tax bill are also common. Fraudsters will sometimes ask the victim to invest in a fake business opportunity, gardaí said.

“This crime often leaves vulnerable people with a feeling of hurt and mistrust in addition to their financial loss,” the garda said.

If a fraudster uses a dating app to meet the victim they will typically ask to continue their conversations on another forum, such as instant messaging or a chatroom.

They use fake photographs and life stories but will often avoid answering personal questions while asking many themselves.

Meetings in person will sometimes be planned but typically never take place, with the fraudster making up an excuse for cancelling.

In one case, a man told a woman he was coming to Ireland to see her and persuaded her to hand over €2,000 which he said was to pay for four nights in a five star hotel. He never showed up.

They usually ask for money to be transferred to foreign bank accounts or to locations outside Ireland via money transfer services. However gardaí warned Irish phone numbers or lodgement numbers “should not be considered as evidence that the person is genuine.”

Chief Supt Lordan of the Garda National Economic Crime Bureau warned that “intimate images” sent to fraudsters can be used to blackmail victims and advised people to “think twice before using a webcam”.

He said most people in Ireland are being scammed by people outside the country but that “it’s not all one way traffic.”

“There have been a number of fraudsters living in Ireland targeting people abroad.”

The Garda said “there is no doubt” this activity is illegal. There are many open investigations and there have been a number of prosecutions.

Chief Supt Lordan advised people to “trust their instincts - if it sounds like it is too good to be true, it probably is.”