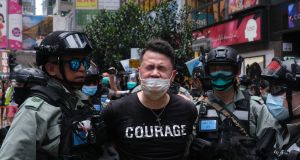 Andrew Wan, a pro-democracy lawmaker, is arrested by riot police during a protest in Hong Kong in July. File photograph: Roy Liu/Bloomberg

Ireland has joined other EU countries in suspending its extradition treaty with Hong Kong in response to draconian security measures imposed on the city by Beijing.

The decision by the Irish Government was specifically triggered by the introduction of the National Security Law in Hong Kong earlier this year which allows the Chinese government extensive control of security matters in the region and the extradition of Hong Kong residents to mainland China to face trial on certain matters.

The law also gives the government greater power to target regime critics and punish the media and opposition groups.

It has been defended by China as filling a long-standing security gap in Hong Kong’s administration.

Attempts to pass previous versions of the law prompted massive protests in the region, starting in June 2019.

“This decision ... clearly signals Ireland’s concerns in relation to the rule of law in Hong Kong and the erosion of judicial independence promised under the ‘one country, two systems’ principle,” Minister for Foreign Affairs Simon Coveney said in the Dáil last week.

Confirming the move, a spokeswoman for the Department of Foreign Affairs said on Sunday that, along with the Department of Justice, it has reviewed the implications of the law for Ireland’s extradition arrangements with Hong Kong.

“This suspension, which puts the operation of the agreement on hold, was taken in concert with other EU Member States who have or are also planning to suspend their respective agreements.”

Germany, Finland, the UK and the Netherlands have already suspended their extradition treaties with Hong Kong as have the US and Canada.

Chinese Ambassador to Ireland He Xiangdong did not respond to requests for comment on Sunday.

A spokesman for the Chinese Embassy in Dublin defended the National Security Law as protecting the "lawful rights, interests and freedoms of Hong Kong residents".

He added the Irish-Hong Kong extradition treaty "helps promote judicial cooperation between the two sides. It is in the interests of both sides, rather than one side only."