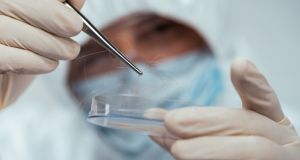 Under the Criminal Justice Act, DNA samples can be collected from crime scenes and stored indefinitely. Photograph: iStock

Forensic investigators are able to match crime scene DNA to a suspect 20 per cent of the time using Ireland’s new DNA database, the head the forensic science laboratory has said.

Last month Tánaiste and Minister for Justice Frances Fitzgerald said in an answer to a parliamentary that just under 11,000 DNA profiles have been taken and entered into the database since it was introduced in November 2015.

The director of Forensic Science Ireland (FSI) Sheila Willis said the database has now grown to the size where investigators are able to match a new DNA profile to a known offender or suspected offender one out of five times.

“When you put an unknown stain into the system, you’ve a 20 per cent chance of hitting against a possible suspect,” she told The Irish Times.

She said the 20 per cent figure will continue to increase as more profiles are added.

Last November the FSI released figures stating that in the first year of operation more than 530 crimes have been linked to specific offenders because of the database including 359 burglaries and five sexual assaults.

Ms Willis said that number has grown substantially since then. “It’s built on that success since then, it’s certainly helping to solve crime.”

Under the Criminal Justice (Forensic Evidence and DNA Database System) Act introduced in 2015, DNA samples can be collected from crime scenes and stored indefinitely. Samples are also taken from prisoners, suspected offenders and those on the sex offender’s register.

Generally, a DNA sample can only be taken from an arrested person if their alleged crime carries a potential prison term of more than five years.

The database allows investigators to match crime scene DNA to suspects or to match it to other crime scenes, allowing them to determine a pattern of offending.

The database is housed within the offices of the FSI, formerly known as the Forensic Science Laboratory, located on the grounds of Garda Headquarters in the Phoenix Park.

The new system has been broadly welcomed, however the Irish Council of Civil Liberties has said it will be closely watching the handling of the database to ensure it is not being misused by gardaí.

Ms Fitzgerald said an oversight committee for the database has met six times so far to ensure the provisions of the act are being followed.

Some international experts have raised concerns about an overreliance on DNA evidence, including within the Irish justice system.

Dr Itiel Dror, a cognitive neuroscientist at University College London, told The Irish Times last year that forensic examiners can be subconsciously biased against suspects which may lead them to find a DNA match where none exists.

He said in the Irish system investigators are given information about the crime or the suspected offender which may bias them when comparing DNA profiles.

“Rather than looking at the evidence alone, forensic scientists are influenced by expectations and information provided by the context of the case which makes them see things differently and not see things at all,” he said. “So really, we’re contaminating their minds and not enabling them to look at the evidence impartially.”