Cannabis, cocaine and ecstasy worth €290,000 seized 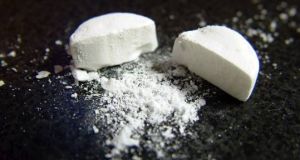 Ecstasy tablets estimated to be worth €1,150 were seized along with cannabis and cocaine. File photograph: iStockPhoto

Gardaí seized cannabis, cocaine and ecstasy with a street value of €290,000 at a house in Dublin on Thursday.

Confidential information was received by gardaí and a house was searched in Huntstown Court, Blanchardstown, Dublin 15.

A 20-year-old man was arrested and was being detained on Friday at Blanchardstown Garda station.

Covid-19: Contact tracing recruits asked to bring own laptops to work due to HSE delay 02:22
Rape victims to be legally represented at trial if their sexual history is examined 02:17
UCC criticised for links with controversial Chinese university 02:06
Cork shootings: Gardaí hope ballistics report can provide answers 01:00
Covid-19 transmitted in fewer than 10 schools – Nphet 01:00