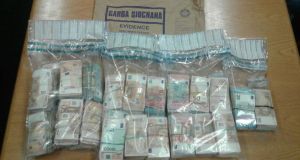 The Garda National Drugs and Organised Crime Bureau seized more than €300,000 in cash, along with cash counting and packaging equipment.

Two men, understood to be brothers and allegedly linked to the Kinahan drug gang, remain in Garda custody having been arrested separately on Thursday.

One man in his 30s was arrested at an address in the Beacon South Quarter apartment block area of Sandyford, Co Dublin, where more than €300,000 in cash and a banknote counting machine, together with a plastic bag vacuum-packaging device, were seized.

The other man, also said to be in his 30s, was arrested in a follow-up operation in Clondalkin.

The pair were both arrested under Section 4 of the Criminal Justice Act 1984, under which they may be detained for two periods of six hours each and a further 12 hours, not including break, meal and sleep time.

The arrests were made by the Drugs and Organised Crime Bureau and the Special Task Force that has been focused on suppressing the activities of both the Kinahan and Hutch gangs.

The gangs have been involved in a tit-for-tat feud fought in Spain and Ireland that intensified in early 2016 with the shooting dead of Kinahan associate David Byrne in Dublin’s Regency Hotel.

Since extra resources were directed against the gangs in the second half of 2016, including additional Armed Support Unit capability, gardaí have foiled several imminent shootings and, through arrests, high-visibility patrolling and vehicle checkpoints, have disrupted both gangs.

It is believed the €300,000 allegedly found in Sandyford was being counted and prepared for transnational transport by being placed in vacuum-sealed bags that would evade sniffer-dog detection, possibly en route to the Kinahan gang headquarters in Spain.