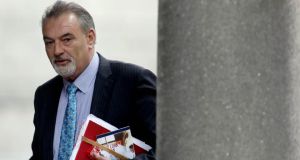 Ian Bailey has said in a letter to Enda Kenny that his life was ‘fouled and tangled in a web of deceit, denial, corruption and conspiracy’. Photograph: Collins

Journalist Ian Bailey has written to Taoiseach Enda Kenny saying he feels “short-changed” by the Fennelly Commission inquiry and has called for the establishment of a full public inquiry into the Garda investigation of the murder of French film producer Sophie Toscan du Plantier.

In his letter, Mr Bailey (60) reminded Mr Kenny he had invited people with “knowledge of Garda misconduct” to contact him.

Mr Bailey said he was now contacting him again as he found that his life was “fouled and tangled in a web of deceit, denial, corruption and conspiracy”.

Mr Bailey said in his letter that it was as a result of his order for discovery in his High Court action for wrongful arrest against the State that the issue of the widespread secret recording of telephone calls in Garda stations had come to light.

The Fennelly Commission report, published last month, found no evidence of criminal or illegal behaviour in the actions of gardaí investigating Ms Toscan du Plantier’s murder, although it did find some gardaí were willing to contemplate engaging in improper conduct.

Mr Bailey said that while he had the greatest of respect for Mr Justice Nial Fennelly, who chaired the commission, the inquiry had focused just on the issue of phone-call recordings, even though its terms of reference would have allowed Mr Fennelly to look at other aspects of the murder investigation.

“Term of reference ‘M’ specifically required the Fennelly Commission to review all recordings relating to the murder investigation of the late Sophie Toscan du Plantier and to establish whether those calls and any other acts or events disclosed evidence of unlawful or improper conduct.

“It is this oversight which now prompts our call for a stand-alone tribunal of investigation . . . we believe the only way for the truth to come is for an efficient, fast-tracked tribunal investigation based on the purposive intent of the wording of Term Ref 1(M).”

Mr Bailey was twice arrested for questioning about the murder of Ms Toscan du Plantier in west Cork in December 1996 but was released on both occasions without charge and he has denied both any involvement in the murder and ever making admissions about the murder.