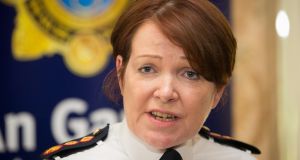 Garda Commissioner Nóirín O’Sullivan has rejected the suggestion she misled an Oireachtas committee on Thursday when disclosing how she came to know about financial irregularities at the Templemore Garda College two years ago.

However, pressure continues to mount on her after a senior Garda officer seemed to contradict her evidence at the Public Accounts Committee (PAC).

Fianna Fáil said the matter “exposes significant dysfunctionality at the top of the organisation”.

“The public and rank and file gardaí­ are entitled to expect that the force is being managed both competently and effectively. Regrettably, the evidence heard during yesterday’s PAC meeting confirms that once again, this is not so,” the party’s justice spokesman Jim O’Callaghan said in a statement.

Speaking later on RTÉ’s Six One News, Mr O’Callaghan said “if we were in government we would remove the Garda Commissioner”, based on her handling of the Garda breath testing controversy.

However, Fianna Fáil would not support a Dáil motion of no confidence as it represent an overstepping of the proper role of the Oireachtas, he said.

At the PAC on Thursday, sharp differences emerged between Ms O’Sullivan and the Garda director of human resources John Barrett over a meeting they both attended on the issue in July 2015.

Dismissing the discrepancies that arose between her statements and Mr Barrett’s, Ms O’Sullivan said on Friday “under no circumstances did I mislead the committee”.

“After the meeting of July 27th, irrespective of how long it took, immediate steps were taken to address all of the issues,” Ms O’Sullivan said.

Speaking at the PAC meeting, which lasted more than five hours, the Commissioner said that in July 2015, she was having a cup of tea in a room in the Templemore college when Mr Barrett informed her there were problems.

The meeting was brief and it was the first time she knew of any concerns in relation to spending at the Garda training college, she said.

However, Mr Barrett then appeared to contradict her evidence. He said the meeting lasted for more than two hours.

He produced notes which he said he had taken at the time he met her and in which he had recorded the start and finish time of the meeting, as well as who was present, the issues discussed and the order in which people had walked into the room.

Under Section 41 of the Garda Síochána Act, a Garda Commissioner is legally obliged to inform the minister of the day of any significant matter that would undermine public confidence in the force.

Speaking on Friday, Ms O’Sullivan also denied she had seen any examples of financial irregularity or a “slush fund” when she spent time in the Garda college as a Superintendent in charge of specialist training in 2000.

“I was in charge of specialist training, so detective training, firearm training, and driver training, that was my focus” she said.

The Garda Commissioner said she was never involved in any of the clubs and societies that were identified in the internal audit as receiving irregular transfers from official Garda funds. The audit flagged that the recreational Garda boat club had receiving €100,000 in official funds between 2000 and 2003 from a separate entity “Garda Sportsfield Ltd”.

Ms O’Sullivan also said she was not able to confirm to the PAC if criminal investigations would follow the revelation of financial irregularities in the training college. From the facts that had been established so far, it was “too early to say”, she said.

Assistant Garda Commissioner John O’Driscoll is conducting a review of the audit report into the financial irregularities and will make recommendations to Ms O’Sullivan on whether any civil or criminal laws were broken.

“Those recommendations will be fully followed through. And we will get to the bottom of this, and we will absolutely find out what happened, who knew about it, how was this going on,” Ms O’Sullivan said.

The audit into finances at the Garda college identified nearly 50 different bank accounts, and a lack of central control over where and how money was being spent. One example highlighted was an account for laundry services which had been used to pay for entertainment, gifts and also made contributions to the Garda boat club.

Members of the PAC said they were dissatisfied with the statements and discrepancies in senior Garda management’s reports at Thursday’s meeting.

Vice-chairman of the committee Alan Kelly said there was a huge number of unanswered questions.

“The team from the Garda Síochána was not united and gave contradictory evidence,” the Labour TD said.

He said there were also “incredible discrepancies” in the evidence from An Garda Síochána and the Department of Justice.

“Ms O’Sullivan is expected back before the PAC in the coming weeks and she needs to return with full and frank answers,” Ms McDonald said.

The Commissioner will appear before the committee again in July, and has been asked to supply a large volume of additional information.

Ms O’Sullivan confirmed to the PAC that the head of the Garda’s legal services, Ken Ruane, spoke of Section 41 of the Garda Síochána Act when advising her of the concerns relating to Templemore back in 2015.

However, she decided against immediately bringing the matter to the attention o Minister for Justice Frances Fitzgerald.

Ms O’Sullivan said she was made aware of the issues on July 27th 2015, and that a working group was established the very next day.

Mr O’Callaghan said the conflicting accounts provided by senior gardaí­ on the Garda college irregularities had further damaged public confidence in the force.

“Irrespective of who is correct, the conflict reveals that senior management of An Garda Síochána were unaware of vital issues of concern and importance to the force. This exposes significant dysfunctionality at the top of the organisation....

“While they will return to appear before PAC this summer, the Commissioner must first realise the significance of these latest revelations. Deflecting poor management of public money as a legacy issue is not an acceptable explanation of these potentially severe breaches of procedure.”

Speaking to reporters in Canada on Friday, Taoiseach Enda Kenny said: “I don’t have the details of any evidence given by the Garda Commissioner to any committee yesterday.

“I still retain full confidence in her to do her job and expect her to do that. I would point out we have put in place the Independent Policing Authority, Gsoc with enhanced powers, an independent Garda inspectorate, and the Minister for Justice is very anxious to see that every week measures are taken that will deal with the many challenges that An Garda Síochána face.”