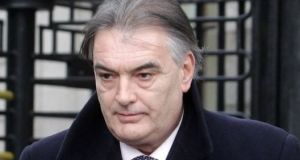 Ian Bailey, a British citizen who lives in Schull, Co Cork, denies involvement in the murder of Sophie Toscan du Plantier during the night of December 22nd-23rd, 1996. Photograph: Niall Carson/PA

Ian Bailey will be tried in Paris next May for the December 1996 murder in west Cork of Frenchwoman Sophie Toscan du Plantier, the association established to seek the truth about the killing has announced.

The trial will be held in the Paris assize or high criminal court, before three professional magistrates beginning on the afternoon of Monday May 27th. It will go into recess for the Ascension Day holiday on May 30th and end on Friday the 31st May.

Mr Bailey, a British citizen who lives in Schull, Co Cork, denies involvement in the murder of Ms Toscan du Plantier during the night of December 22nd-23rd, 1996.

Mr Bailey’s French lawyer, Dominique Tricaud, said he and his client were still considering whether or not to participate in the trial. “If Mr Bailey does not attend, I will not attend either,” he added.

A statement on Wednesday from ASSOPH, the association established to seek the truth about the killing, noted that Ms Toscan du Plantier was murdered “in particularly horrible circumstances” and that her parents, Georges and Marguerite Bouniol, filed a civil suit against her unknown killer on January 17th, 1997. The trial is the result of that lawsuit.

Mr Bailey “still lives freely in Ireland, since Irish justice has always refused to turn the accused over to French authorities,” the statement said, adding that it is “highly improbable that the accused gives himself up or is arrested before” the trial.

The lawyers and family of the deceased “are pleased that a criminal trial is being held in France where conditions for a fair trial exist,” the statement added.

Ms Toscan du Plantier’s uncle, Jean-Pierre Gazeau, founded ASSOPH in 2007. It has about 100 members, close to a third of whom did not know the victim.

“This is the first time that legal action will be taken against Bailey,” Mr Gazeau said.

The victim’s parents look to the trial “with hope, but at the same time it will be painful, it will stir up old suffering,” Mr Gazeau said.

Mr Tricaud complained that the investigating magistrate had refused to give Mr Bailey access to the file.

“You cannot stay home in Ireland and demand to have access to the investigation. If you don’t go to France, it’s not possible,” explained Alain Spilliaert, a lawyer for the family.

Mr Tricaud claimed that a report by the DPP’s office which concluded there was insufficient evidence to try Mr Bailey in Ireland “declared him innocent.”

Mr Spilliaert noted that objections raised by Mr Bailey’s counsel were dismissed by courts in France and Ireland. “The charge sheet was translated into English for him. He has been represented by a French lawyer. He has received legal aid in France. He has been treated fairly, in accordance with the standards of the European Convention of Human Rights,” Mr Spilliaert said.