‘I was quite upset’: Going undercover to find a stolen bike 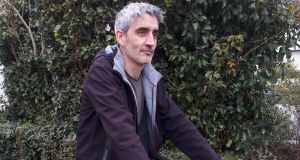 Ken Reid: ‘I met up with two detectives who were there to intercept the man where I was to meet him, at a garage in a public place.’

“To be honest I was quite upset about it . . . It was my favourite possession,” says Ken Reid about finding his old touring bicycle stolen one evening recently.

An hour and a half earlier, he had locked it to a sturdy metal stand on Library Road in Dún Laoghaire, a short distance from the restaurant he was having dinner in with his family.

“I bought it second hand about 15 years ago and I use it mostly for commuting. I was very attached to it,” he says.

“I had a decent lock; I spent about €30 on it. I’d say it was prised off with a steel bar or something like that. I didn’t expect to get it back.”

Nonetheless he reported his 25-year-old Dawes Super Galaxy stolen to local gardaí and over the coming weeks kept an eye on online classsifieds sites like Adverts and Done Deal.

“By chance, on Done Deal, I came across it,” he says. “I could tell straight away it was mine – its particular design, the minor damage on the frame and a couple of components I had put on it. There was a phone number for the vendor. He was based in Wexford. ”

“They were very helpful from the start,” he says. “Basically we agreed for me to contact the vendor, pose as a potential buyer and meet him on St Patrick’s Day.

“I met up with two detectives who were there to intercept the man where I was to meet him, at a garage in a public place. He said he bought it in a market somewhere.”

When Reid told gardaí that the original wheels and Brooks leather saddle had been removed from the bike, they recovered the same from the man’s house.

“What I would say is that the gardaí were excellent,” he said. “I really appreciate them taking a bike theft seriously. I was super pleased to get it back.”