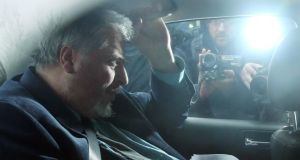 There is no official research on sentencing trends for the offences of defilement and grooming, under which the former Irish Times sportswriter Tom Humphries was jailed this week for 2½ years. But some information is available.

In October 2015, a 22-year-old man who had sex with a 14-year-old, after contacting her through Facebook, was jailed for three years. He also tried to convince the teenager to bring her 12-year-old sister, so he could “train her”. The older girl refused.

In another case that year a 30-year-old man who had been given a three-year suspended sentence in 2011, after pleading guilty to defiling a 13-year-old girl, had his suspended term upheld by the Court of Appeal.

In February 2014, Andrew Durran, who is now 44, and used to live on Dromheath Avenue in Blanchardstown in Dublin, was jailed for six years, with one suspended, for the sexual defilement of his daughter, who was 15 at the time. He was brought back to Ireland to stand trial after fleeing to Spain in 2009, while the Garda investigated the case.

Many sentences were, like Humphries’s, very short. And only people with serious previous convictions were jailed for substantial periods

In November 2013, Damien Jermyn, a former garda in his early 30s who had oral sex with a 16-year-old boy in HSE care, was sentenced to two years in jail, with the final year suspended. He pleaded guilty to two charges of defilement.

In July 2013, a 19-year-old was given a suspended jail term for four counts of defilement of a 14-year-old girl he had sex with after befriending her on Bebo.

That year a 25-year-old man who had sex with a 13-year-old girl he had befriended via the same social-networking site was jailed for 3½ years, 18 months of it suspended.

In June 2012, a 22-year-old man who could not be named for legal reasons was given a two-year suspended sentence after having sex with a 15-year-old girl he befriended on social media.

In January 2012, James Rossiter of Parkview, Harold’s Cross, who is now in his early 40s, was jailed for six years for having sex with his 12-year-old stepdaughter.

In 2008, the Courts Service of Ireland began a pilot study of the judges’ sentencing, including in 118 sexual-offence cases. One conviction resulted in community service; 22 led to suspended sentences; two more were dealt with by fines. In 29 other cases judges imposed prison terms of less than two years. A total of 27 people were jailed for between two and five years; 21 were jailed for five to 10 years; and four were imprisoned for more than 10 years. In all, 22 per cent of offenders convicted of sexual offences did not go to prison.

Such cases show the range of sanctions in recent defilement convictions. Many sentences were, like Humphries’s, very short. And only people with serious previous convictions were jailed for substantial periods. The Criminal Law (Sexual Offences) Act 2017, which sets out more recent types of sex crime, and provides for longer sentences, could not be used against Humphries, as his crimes predated it.

Giving only short or medium-length sentences to child sex offenders is a problem for Irish society, according to the head of Dublin Rape Crisis Centre, Noeline Blackwell. She says that sentences in cases such as Humphries’s underline the progress needed to ensure victims are fairly treated.

As there are no long-term ongoing studies of sentencing for sexual offences, and judges do not set out their reasoning, it can be hard to work out the principles they are adhering to – which can cause public anger in high-profile cases such as Humphries’s.

“We should have research so we could frame sentencing guidelines that would be of more help to the judiciary in establishing consistency. And it would also be more help to the general public in understanding sentencing,” says Blackwell, who would like to see the Court Service’s pilot project resumed.

She adds that many callers to Dublin Rape Crisis Centre since Humphries was sentenced have been extremely angry. Short sentences for grooming and sexually abusing young people send a message that the “taking of a childhood” does not merit serious sanction. “If the courts assess that that is the extent of harm done to the victim, then we have a problem.”