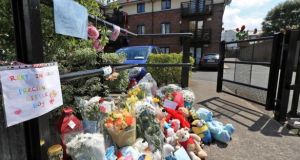 Flowers and cards placed at the entrance to the Riverside Apartments, Poddle Park, Kimmage in July. Photograph: Colin Keegan/Collins

The father of a three-year-old boy found with stabbed wounds said he arrived home from abroad to find his son was deceased.

Khalid Omran, father of toddler Omar Omran, gave evidence at an inquest into his son’s death.

Omar was found with stab wounds at his home at the Riverside Apartments, Poddle Park, Kimmage, Dublin 12. He died on July 10th 2017.

Dublin Coroner’s Court heard that legal proceedings have commenced in relation to the little boy’s death and Inspector Liam Kelly applied for an adjournment of proceedings under section 25 (2) of the Coroner’s Act.

Reading his deposition from the witness box, Khalid Omran gave evidence of how he formally identified his son to gardaí.

“On July 11 2017 I returned to Ireland from Iraq to find my son deceased,” he said. The following day, he formally identified his son to gardaí.

Deputy State Pathologist Dr Linda Mulligan conducted a post-mortem examination and gave the cause of the child’s death as multiple stab wounds.

Coroner Dr Myra Cullinane extended her condolences to the child’s father and adjourned the inquest until after all other proceedings are completed.