Half of barristers experience threats in their work, survey finds 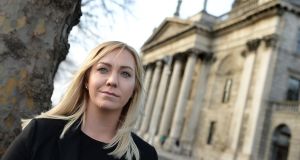 Barrister Rachel Baldwin said a woman at the Dolphin House Family Law Court in Dublin tried to push her down the stairs after a hearing. Photograph: Dara Mac Dónaill / The Irish Times

More than half of all barristers have experienced violence or aggression in the course of their work, with the family courts being cited as the most dangerous place to practise, according to a new survey.

“Organised lay litigants” in property repossession cases and aggrieved partners in family law cases are some of the main sources of threats and violence against barristers, said Bar Council president Micheál O’Higgins.

Some barristers have also received text messages from lay litigants or their supporters threatening them and their families.

Mr McGann’s home in Strokestown was the subject of a high-profile repossession by agents acting for KBC Bank. There is no suggestion he was involved in sending threatening messages.

Other barristers to receive threatening messages include senior counsel Elizabeth O’Connell. It is understood Ms O’Connell received at least one death threat last year following her involvement in a rape trial in which, acting for the accused, she made reference to the complainant’s underwear.

The survey of 460 barristers (out of a total of 2,200) undertaken by the Bar Council shows 53.4 per cent have experienced violence, aggression or threats relating to their work, either in person, online or via text message.

Family law was cited by 44 per cent of respondents as the most dangerous area to work in followed by criminal law (36 per cent) and debt or repossession cases (32 per cent).

The survey suggests violence against lawyers goes far beyond the cases reported in the media. Only 7 per cent of barristers who experienced aggression reported it to the Courts Service afterwards.

“It’s become so common that we’re just used to it,” said family law barrister Rachel Baldwin. She said a woman before Dolphin House Family Law Court in Dublin recently tried to push her down the stairs after a hearing.

“I run up and down those stairs every day and something made me hold the handrail that day, which I never do.”

On another occasion a man involved in a family law case waited for several hours for Ms Baldwin to leave court before following her down the Quays.

“I just went into a coffee house and waited it out. And he was staring me out of it.”

Family law cases are highly emotive and tempers are perhaps more likely to flare there than in the criminal courts,” she said. “You’re dealing with a denial of access to children or domestic violence. People don’t understand you’re just doing a job so you become kind of the target and it becomes personal.”

Dolphin House is a particular problem because it is so cramped and there are very few people in court at any one time as family law cases are heard in private.

“The facilities are completely inappropriate. You’ve someone down there for a domestic violence order and they’re sitting across from their alleged abuser.”

Security scanners and extra gardaí were put in place in the family court complex in Phoenix House in Dublin last month after a major security incident but no similar measures are planned for Dolphin House.

Mr O’Higgins said the lack of space and facilities in courts such as Dolphin House contributed to a “pressure cooker” atmosphere.

“There’s no refuge for litigants, who are understandably sometimes highly stressed. There’s nowhere for them even to sit down with a cup of tea and decompress.”

He also expressed concern that in criminal matters an accused can fire their legal team and take their place on the barrister’s bench, meaning they are “within striking distance” of the prosecuting counsel.

This is what occurred during the 2017 murder trial of Vesel Jahiri when the accused punched prosecuting counsel Patrick Marrinan SC in the face.