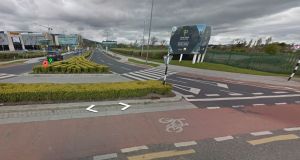 A robbery of a cash-in-transit vehicle was perpetrated outside a bank in Carrickmines Retail Park (above) in Dublin at about 5pm on Friday. File photograph: Google Street View

Gardaí are appealing for witnesses following the robbery of a cash-in-transit vehicle in south Dublin on Friday evening.

The incident happened outside a bank at Carrickmines Retail Park at about 5pm.

Two men approached and threatened a security guard with a hammer during the incident, gardaí said.

The pair managed to take a cash box and escaped the scene in a Red Toyota Corolla car, which was later found burnt out a short distance away from the scene of the robbery.

“No arrests have been made and investigations are ongoing. No one was injured during the incident. It’s understood the cash box was empty,” a Garda spokesman said.

Gardaí at Dundrum are investigating the matter and have appealed to anyone who may have witnessed anything suspicious in Carrickmines or seen the Red Toyota Corolla in the area to contact them on (01) 6665600 or call the Garda Confidential Line on 1800 666 111.