Jastine Valdez: ‘It’s just so sad what happened to her’ 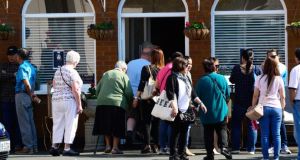 Members of Ireland’s Filipino community were among those who paid their respects to Jastine Valdez at a funeral home in Bray, Co Wicklow, on Friday. Photograph: Cyril Byrne

Jastine Valdez lay in repose, a picture of beauty and innocence, a bare few hundred yards from the home of the man who murdered her.

“She looked very innocent – so, so innocent,” said Aida Felichano, from Luzon, the largest island in the Philippines. Jastine, who was just 24, also came from Luzon.

Aida and Cyril now live in Charlesland in Greystones, Co Wicklow, with their 13-year-old daughter. They have been in Ireland for 16 years and work in nearby Newcastle Hospital.

They never met Jastine, or her parents, Danilo and Teresita from Enniskerry. But they came to Jastine’s lying in repose at Murphy’s funeral home on Bray’s Boghall Road, drawn by the urge to show pagdamay, a Filipino word combining notions of sympathy, commiseration and help – the sort of solidarity in the face of bereavement that might especially bind any immigrant community.

“That guy, he didn’t give a chance to that girl to live,” Cyril said of Jastine’s killer, Mark Hennessy, whose seemingly random act of unexplained brutality will linger forever for Jastine’s grieving parents.

“We don’t have to know them,” he said of the Valdez family. “They are Filipino like us.”

Pagdamay was at work across the widely-scattered but nonetheless close-knit Filipino community as, throughout Friday afternoon, a steady stream of people came from around north Wicklow, Dún Laoghaire, Dublin city and parts of north Co Dublin such as Swords to pay their respects.

The sunny day could not disguise the bleakness of the occasion.

Rhea, who works in Leopardstown hospital, came from Dún Laoghaire with her children Angeline (eight) and Ainon (five). She described how she and Filipino colleagues were glued to developments over last weekend, listening and waiting, hoping against hope that the news would be good.

“We were still praying [when her body was found],” she said. “It’s just so sad what happened to her.”

Irish-born people also came to pay their respects. A late middle-aged, well-dressed woman, a friend of the family who did not want to give her name, spoke while clutching a tissue. “Words fail me,” she said, “I have no words.”

Julie Ann Tauro was another visitor to the funeral home who did know Jastine, if only slightly.

Julie Ann was a regular customer in the Blue Ginger Chinese restaurant on Bray’s Main Street where Jastine worked. Entering, Jastine “would always be there, smiling,” said Julie Ann.

She recalled the inconsequential details that lingered in her mind – mentioning a packet of sweet sausages from Jastine that she still had in the freezer at home and was not sure she could ever bring herself to cook.

Jastine was “so nice and friendly but very shy” with it, recalled Julie Ann. “She’s not the girl who would jump in [to a conversation].”

And so they continued to come and go throughout the afternoon, unfailingly polite in their grief and solidarity; happy to talk but as bewildered about what had happened as the rest of the country.

Jastine’s reposing continues on Saturday from 2pm to 6pm. It is understood that her remains will be repatriated to the Philippines at a date yet to be decided.