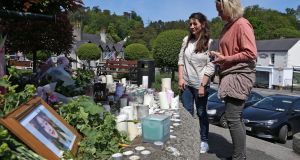 The family of the late Jastine Valdez has said she was a “fun-loving, wonderful, caring daughter and friend”.

Her parents, Teresita and Danillo Valdez, have thanked the Irish people for their support, along with the Filipino community living in Ireland.

Ms Valdez, a 24-year-old student from the Philippines, had been living in Enniskerry, Co Wicklow with her parents, who became Irish citizens in recent years. She was abducted from a roadside while walking outside the village just after 6pm last Saturday. Her body was found off Puck’s Lane, Rathmichael, south Co Dublin, on Monday.

In a statement, her parents said: “It has been of some comfort knowing how deeply our beautiful daughter Jastine has affected the people of Ireland.

“Our daughter’s plans were to settle in Ireland, buy a house here and make a new life. She was a fun-loving, wonderful, caring daughter and friend. She is always in our hearts and in the hearts of the people of Ireland,” the statement said.

Mr and Mrs Valdez thanked the emergency services, gardaí and in particular two superintendents and their liaison officer.

“They have acted with the utmost professionalism and speed to return our beautiful daughter Jastine to us,” they said.

“We also wish to acknowledge the support and sympathy of our family, friends, and the people of the Philippines, Outreach Ireland and both the Philippine and Irish Department of Foreign Affairs for their help and support.

“Finally we wish to thank the wonderful help and support given by Mark Congdon, Consul for the Philippines, for all he has done to support us during this traumatic time.”

The statement ends with the word Salamat, which means thank you in Filipino.

The man suspected of her murder, Mark Hennessy, was shot dead by gardaí at Cherrywood Business Park on Sunday evening. The construction worker and father of two, originally from Ballybrack, Co Dublin but living in Bray, Co Wicklow, is believed to have strangled her.

The Garda inquiry has been unable to find any previous connection between Hennessy and Ms Valdez before she was abducted.