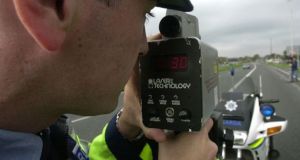 At present, a driver who breaks the speed limit is subject to a fine of €80 and three penalty points, irrespective of the speed they were doing. File photograph: Cyril Byrne/The Irish Times

Ministers on Tuesday agreed to the proposals, which seek to impose more severe sanctions on motorists who have exceeded the speed limit by greater amounts.

It is understood there was no row at Cabinet about the move, with one Independent Alliance source claiming rural Fine Gael ministers who may have had objections “bottled it”.

It is understood Minister for Rural Affairs Michael Ring, Government chief whip Sean Kyne and Minister of State for Defence Paul Kehoe “registered concerns” about the proposals. Mr Ross said there “was no revolt” at the Cabinet meeting to discuss his graduated speed proposals and that there was a very good discussion” which was “very constructive.”

The approval comes a year after similar but stricter proposals were rejected following a revolt by Fine Gael ministers, as well as concerns expressed by Attorney General Séamus Woulfe.

The memo brought by Mr Ross to Government sought to impose more severe sanctions on motorists who have exceeded the speed limit by greater amounts.

At present, a driver who breaks the speed limit is subject to a fine of €80 and three penalty points, irrespective of the speed they were doing.

The Minister’s plan will now impose higher sanctions for those travelling at higher speeds. Originally, Mr Ross wanted anyone who travelled 30km/h above the speed limit to be prosecuted for dangerous driving.

But following negative reaction from a group of Ministers based outside the capital, principally Minister for Rural Affairs Michael Ring, Mr Ross has diluted some measures and dropped other proposals to assuage their concerns.

Rather than face a charge of dangerous driving, a motorist found travelling 30km/h above the speed limit will face prosecution under a new standalone offence, with the prospect of a fine of €2,000 and seven penalty points.

‘Have to change our ways’

Mr Ross said it wasn’t an urban/rural issue but about bringing about a change in mindset with regard to speeding. Speaking on RTÉ’s Radio News at One programme, the Minister said he is determined to see the legislation through which he hopes will pass through the Dáil and Seanad as quickly as possible.

“I want it to go through as soon as possible because this is about saving lives,” he said.

Meanwhile, a barrister who specialises in road traffic law has welcomed the proposed graduated speeding penalties. David Staunton said most people who have been subject to a speeding prosecution would feel that a graduated system is more equitable and fair.

“Obviously there have been some instances where a person might be less than 10km over the limit and they would be treated in the same way that a person who was driving far in excess of the speed limit. Clearly that’s not very fair,” he told RTÉ’s Sean O’Rourke show.

He said the new proposals would allow for greater streamlining of cases coming before the courts as motorists would be more willing to accept a fixed penalty that reflects their level of culpability. He also thought it is likely to reduce the number of cases where people will say ‘I’ll take my chances and go to court.’

Speaking on the same programme, Fianna Fáil’s transport spokesperson Marc MacSharry TD described Mr Ross’s plans as “unworkable”. He said the proposed law is not enforceable and that at present 35 per cent of speeding fines are not paid with €27million outstanding. “The proposed legislation is not enforceable or workable and takes no cognisance of context.”

However, Fine Gael TD Fergus O’Dowd responded that anything that reduces road deaths has to be welcomed. A judge can decide context, he said. The Louth TD quoted figures from the Road Safety Authority that up to August 2019 there were 93 road deaths, 70 per cent of which were on rural roads where there was a speed limit of 80kph, so this wasn’t an urban/rural issue.

“I stand on the side of saving lives.” He said that fines graduated according to the speed are “sensible.” “We all have to accept that we have to reduce speed to reduce road deaths.”

Mr MacSharry called for a system similar to Germany where there is a difference in fines between the types of roads and location, such as proximity to schools etc. “This isn’t appropriate legislation, it needs to be properly thought out. The Government needs to get its house in order.”

Mr O’Dowd said “this is about saving lives as road deaths are going up. Motorists have to realise that the faster you go the more likely you are to cause death. “We have to change our ways. You can have your day in court if you want.”