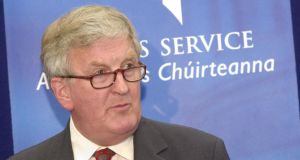 A decision on a replacement for Mr Justice Nial Fennelly, who retired from the Supreme Court last month, is imminent. Photograph: Cyril Byrne

The Government is close to selecting a new Supreme Court judge and will fill at least one vacancy on the High Court in the coming weeks.

A decision on a replacement for Mr Justice Nial Fennelly, who retired from the Supreme Court last month, is imminent after the Judicial Appointments Advisory Board (JAAB) completed its application process and sent a report to the Government. A name could go to Cabinet for approval as early as today.

The most likely scenario is that a High Court judge will be promoted. Alternatively, the Government could choose to appoint a senior barrister, though this has only occurred twice before, when then-barristers Adrian Hardiman and Donal O’Donnell were appointed directly from the Law Library to the highest court. A third possibility is that the post could go to a senior office-holder in the current administration.

Mr Justice Fennelly retired last month, having served on the Supreme Court since 2000, and has been appointed by Government to lead the commission of inquiry into the taping of telephone calls at Garda stations.

The JAAB receives applications for judicial posts and sends Government a list of candidates who meet a set of minimum criteria. However, the board does not rank candidates by merit and the Government is not required to choose from its list, giving ministers wide discretion. Serving judges are not required to apply through the JAAB.

The current vacancies are being filled against a background of major upheaval on the bench. The establishment of a Court of Appeal, legislation for which is expected to be enacted next month, will create nine vacancies on the superior courts - a prospect described last week by the president of the High Court, Mr Justice Nicholas Kearns, as “an unprecedented situation in Irish judicial life.”

The new court’s president-designate is Mr Justice Sean Ryan, and the majority of his fellow judges are also expected to be drawn from the High Court. The vacancies this will create are expected to be filled largely by senior barristers and solicitors, but the names of two Circuit Court judges are also circulating. A building at the back of the Four Courts complex in Dublin has been picked to house the new court.

At the Bar Council’s conference last month, Mr Justice Kearns urged qualified women to apply for High Court posts and said he was confident barristers and solicitors would “respond positively” to the call.

A spokeswoman for the Department of Justice said its objective was to enact the legislation establishing the Court of Appeal before the summer break so the new court could be up and running in October.