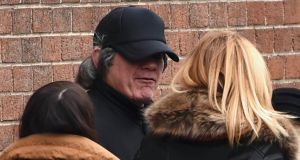 Gerry Hutch wearing a disguise at the funeral for his brother Eddie Hutch in February 2016. Photograph: Reuters

The Kinahan-Hutch feud is being waged between Liam Byrne, Freddie Thompson and Daniel Kinahan on one side and the veteran Dublin criminal Gerry Hutch on the other, according to confidential evidence given to the High Court.

Christy Kinahan Snr, the founder of the Kinahan cartel, is not named as one of the protagonists, nor is his youngest son Christopher Jnr.

The testimony, in sworn affidavits that form part of the Criminal Assets Bureau’s case against Byrne, formally identifies for the first time the key protagonists in the feud.

Daniel Kinahan (41) is one of two leaders of the Kinahan cartel and is based in Dubai. Liam Byrne (38) is the leader of what Cab calls the Byrne organised crime group and is living in Birmingham, as his house and business in Dublin has been confiscated by Cab.

Freddie Thompson (38) is serving life for one of the 19 feud murders to date.

Gerry Hutch (56), also known as The Monk, has been living abroad, mostly in Spain, since the feud began.

But neither Christy Kinahan nor Christopher Kinahan Jnr are linked to the feud in the Garda’s confidential evidence to the High Court.

The evidence says Liam Byrne, who is originally from Raleigh Square in Crumlin, Dublin, has been the leader of what Cab now terms the “Byrne organised crime group” since about 2008.

Christy Kinahan was the first leader of the group in Dublin, the affidavit says. Leadership then passed to Freddie Thompson after Kinahan moved to Spain in 2001 and began an international cartel.

When Thompson was forced to regularly flee Dublin during 2007 and 2008 due to threats from dissident republicans, Byrne assumed leadership of what Cab now terms the crime group.

It is closely allied to, and works with, the Kinahan cartel and the affidavit names 17 of its Dublin-based members.

Gerry Hutch has been identified as leading what Cab describes in its evidence to the High Court as “the Hutch organised crime group”. The 56-year-old Dubliner has been linked to multimillion armed robberies in the 1980s and 1990s. He previously reached a settlement with Cab after a judgement of almost IRL£2 million.

Hutch insisted in the past he had stepped away from crime.

However, his nephew Gary Hutch (34) tried to kill Daniel Kinahan in Spain in 2015 but botched the attack.

Gerry Hutch organised for the Kinahans to be paid €200,000 in reparations for the attempt on Daniel Kinahan’s life.

But after the money was paid, the Kinahan side reneged on the agreement and killed Gary Hutch in Spain in September, 2015.

The feud began when Liam Byrne’s brother, David Byrne (32) was killed during a revenge gang attack at the Regency Hotel six months later.