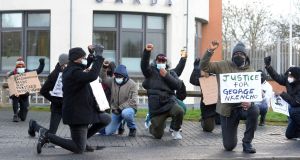 Protesters outside Blanchardstown Garda station on Monday, following the killing of George Nkencho outside his home on December 30th. Photograph: Dara Mac Dónaill

George Nkencho’s sister answered the door to him immediately before he was fatally shot last week, Garda Ombudsman investigators are to be told.

An autopsy by the State Pathologist’s office has confirmed Mr Nkencho died as a result of two shots to the chest. It is understood solicitors for the Nkencho family plan to have an independent autopsy conducted on Mr Nkencho’s remains and to have independent experts analyse footage of the shooting.

The incident began just after midday last Wednesday when Mr Nkencho got into a confrontation with a member of staff in the local Eurospar. He punched the staff member before drawing a knife and walking to the house where he lived with his parents and three siblings in Clonee, Co Dublin.

A large number of gardaí, including two members of the Armed Support Unit, were on the scene by the time he reached the house.

According to sources close to the family, Mr Nkencho’s sister, Gloria Nkencho, will tell Garda Síochána Ombudsman Commission (Gsoc) investigators that her brother knocked on the door and she answered.

Ms Nkencho will tell investigators gardaí had surrounded her brother by this stage and that she asked them to leave him alone and said he had mental health issues.

The sister was then ushered back inside the house by gardaí and the door was closed over but not shut. The deceased’s three siblings were in the hallway when the shots were fired.

Five shots were fired by gardaí, two of which entered the hall through a window, according to written statements from the three siblings. As of last night investigators had not spoken to the family.

The family, along with their legal representatives, Phelim O’Neill Solicitors, are scheduled to meet with Gsoc officials on Wednesday. Prior to the shooting gardaí had repeatedly told Mr Nkencho to drop the knife. They then pepper-sprayed him and used a Taser on him twice. On one occasion when the Taser was used, Mr Nkencho pulled the wires out of his chest.

Garda sources confirmed the sequence of events described by family members but said that officers at the scene could not have known Mr Nkencho’s intentions or his relationship with his family.

“The gardaí involved faced a split-second decision. From their point of view the deceased could have entered the house and taken the family hostage,” a senior source said.

Gardaí had been called to the house on a previous occasion following a psychiatric incident involving Mr Nkencho.

Following this, Mr Nkencho’s family had sought help from their local GP and the HSE. It is understood they were still waiting on the HSE to provide mental health supports at the time of the shooting.

The HSE was not immediately available for comment last night.

Mr Nkencho’s body is not due to be released for burial until Friday. A funeral is expected to be further delayed by a second autopsy at the request of the family.

It is understood the pandemic is making it difficult to find an independent pathologist to perform the autopsy.

Mr Nkencho’s parents are from Nigeria but have lived in Ireland since he was seven years old.

The death has provoked significant anger in the west Dublin community, with protesters vowing to gather outside Blanchardstown Garda station every day for at least another week.

The incident has also led to false information being spread online, including that Mr Nkencho had more than 30 previous convictions. Gardaí have confirmed he had no convictions.

Various claims that Mr Nkencho either had machete or a butter knife are also false, gardaí confirmed. He was carrying a kitchen knife.