Father of two named as Mark Loughlin from Offaly 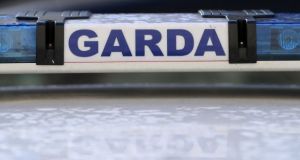 Gardaí were called to Allenswood South at 3.49am following reports of a public order incident/assault. File photograph: Niall Carson/PA Wire

Gardaí believe a father of two was fatally assaulted in Kildare on Sunday after being involved in a traffic collision earlier in the night.

Mark Loughlin (29) from Edenderry, Co Offaly was found with severe injuries on the roadside in the early hours of Sunday. He was taken by ambulance to Naas General Hospital where he was later pronounced dead.

Gardaí are appealing for witnesses to come forward with information on two vehicles involved in an earlier collision near the scene of the assault.

At 12.45am on Sunday there was a collision between a Silver Audi A4 and a Renault TRAFIC van in the Allenwood South area of Kildare. Gardaí from Robertstown arrived at the scene but no one present wanted to make a complaint.

The cars were seized for forensic analysis and gardaí left the area.

Three hours later, at 3.49am, gardaí received a further call about an assault and public order incident near the scene of the earlier crash. When they arrived they discovered Mr Loughlin unconscious on the road as another person administered CPR.

Medical assistance was sought and the man was taken by ambulance to Naas General Hospital where he was later pronounced dead.

Gardaí believe Mr Loughlin was involved in the earlier collision and that an argument about this incident led to the fatal assault.

Mr Loughlin, from Greenwood Park in Edenderry has two children, including a new born baby girl. In February last year he was jailed for ten months for headbutting a 16-year-old girl in Edenderry. Tullamore District Court heard Loughlin had 59 convictions including two for assault.

Gardaí are now appealing for anyone with information on the movement of the silver Audi A4 (registration number 09 CN 6292) on the evening of Saturday, January 2nd, until the collision at 12.45am on Sunday, to get in touch.

They also appealed to anyone who witnessed the collision between the silver Audi A4 and the Renault TRAFIC van at 12.45am on Sunday morning and any other incidents in the Allenwood South area between 12am and 4.30am to get in contact.

Any person with any information on these incidents is asked to contact investigating gardaí at Naas Garda station on 045-884300, the Garda Confidential Line on 1800 666 111 or any garda station.