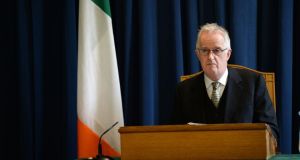 Mr Justice Peter Charleton: will begin hearings into the alleged smear campaign against Sgt Maurice McCabe, including any instructions given by then Garda commissioner Nóirín O’Sullivan. Photograph: Dara Mac Dónaill

The public inquiry into an alleged smear campaign against Sgt Maurice McCabe is the “most appropriate way” to investigate the matter, the judge in charge has reminded politicians.

Meanwhile, the Charleton tribunal is to hold public sittings in early January into the allegations surrounding conduct during the O’Higgins Commission – significantly earlier than had been expected.

In a note announcing the decision, posted on Friday on the tribunal’s website, Mr Justice Peter Charleton pointedly referred to past decisions by the House of the Oireachtas.

Saying he was “mindful” that the Dáil and Seanad had established the tribunal, he said the Oireachtas had decided that “a public inquiry was the most appropriate way to investigate” matters of “public disquiet”.

This is earlier than had been expected as the tribunal was expected to examine a number of other matters before moving onto events surrounding the O’Higgins Commission.

The Charleton tribunal has “considerable documentation” about the commission, including complete and unredacted transcripts of hearings and the written advices, which will be circulated to interested parties “shortly”, it said.

On January 8th, the tribunal, which last sat on October 23rd, will begin hearings into the alleged smear campaign against Sgt McCabe, including any instructions given by then Garda commissioner Nóirín O’Sullivan.

The Charleton tribunal has also prepared its report on the Garda Keith Harrison module, which was heard in September and October, and the report will be submitted to the clerk of the Dáil next week.

The O’Higgins issue will “logically lead” to hearings into matters to do with the former head of the Garda press office, Supt David Taylor, and allegations of negative briefings against Sgt McCabe, the tribunal said.

Equally, it will raise potentially difficult issues about the confidentiality of journalistic sources, along with whether former Garda commissioner Nóirín O’Sullivan used Garda briefing material to influence an RTÉ broadcast in May 2016, concerning what purported to be “a leaked account of the unpublished O’Higgins Commission report, in which Sgt McCabe was branded a liar and irresponsible”.