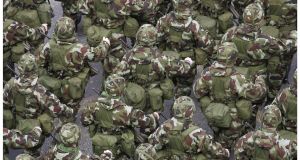 PDFORRA represents about 8,500 enlisted personnel across the Army, Naval Service and Air Corps and said there was a clear disparity between HSE staff being paid just over €80 for an eight-hour sleepover shift and its members being paid a €48 security duties allowance for 24 hours. File photograph: Alan Betson

The number of people leaving the Defence Forces had reached “crisis” proportions but could be alleviated if personnel deployed on duties of 24 hours or more were paid higher allowances, the Republic’s biggest military staff group has said.

His members were being paid only €48 for a 24-hour shift when dispatched on security duties. At the same time, HSE residential care staff had recently secured minimum wage, of just over €80, for an eight-hour shift sleeping-over in a residential centre.

“There are numerous issues requiring remedial action to stem the current outflow from the Defence Forces, which has seen over 600 enlisted personnel depart this year,” Mr Guinan said.

“However, the most important issue is the appropriate payment for additional hours worked.

“It is imperative that all of these remuneration and conditions issues are addressed by the Minister and the Government, so that the organisation and its members can move on from the current crisis”

PDFORRA represents about 8,500 enlisted personnel across the Army, Naval Service and Air Corps and said there was a clear disparity between HSE staff being paid just over €80 for an eight-hour sleepover shift and its members being paid a €48 security duties allowance for 24 hours.

And it believes that treatment of its member, and the unpredictability of where and when they would be deployed on extra duties, was forcing them to leave the Defence Forces.

The security duties allowance for up to 24 hours is paid when, for example, military personnel were deployed to help provide security for a visiting international politicians or when they were asked to join a Garda search for missing persons.

Sources pointed out that military personnel had no control over when, at what notice and to what part of the country they could be deployed, adding the cost of driving to a location could be higher than the allowances they were paid.

A Public Service Pay Commission report during the summer made recommendations on Defence Forces remuneration, with the Government approving a €10 million allowance package as a result.

However, the security duties allowances have not been dealt with and PDFORRA believes these were in need of urgent attention.

The pay commission recommendations were designed to increase remuneration and stem the retention crisis in the forces, some 10 per cent of which were leaving each year.

The Government has approved an increase in military service allowances of about 10 per cent. Cuts imposed to other allowances under the 2013 Haddington Road public service accord were also reversed.

An allowance for members of the elite Army Ranger Winger was increased by €50 per week to €200 while cooks with relevant qualifications received an increase in technical pay of nearly €14 to just over €40 per week.

Minister for State for Defence Paul Kehoe was due to address delegates at the three-day PDFORRA conference on Wednesday when Defence Forces Chief of Staff Vice Admiral Mark Mellet was also due to to address those present.