Garda internship scheme will aim to drive recruitment of minorities 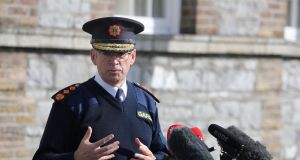 “Fostering and increasing diversity and inclusion in our organisation is not only the right thing to do, but also improves service delivery by benefiting from the talents and life experience of people of all backgrounds,” said Garda Commissioner Drew Harris. Photograph Nick Bradshaw/The Irish Times

The Garda is to introduce an internship programme to encourage minorities to experience life in the force before committing to a career.

The initiative, which will be launched towards the end of 2021, forms part of the Garda’s “Equality Diversity and Inclusion” strategy which was launched on Tuesday.

Other promised initiatives include reviewing the purchasing of equipment such as stab vests and firearms to ensure they suit all genders and the development of a gender identity policy laying out commitments to “diverse gender identities and gender expressions.”

“An Garda Síochána recognises that our people are our greatest resource. If we are to compete for talent in the labour market, we must do more to be perceived as an employer of choice by people from diverse backgrounds,” the action plan states.

“However, recruitment is just the start. We must also ensure that all Garda members, Garda Reserve members and Garda staff have equal opportunities to thrive and excel in an organisation that values them.”

It commits to examining the future purchasing of equipment including “PPE, firearms and vehicles to avoid inadvertent gender discrimination.”

In the past female gardaí have complained of ill-fitting stab vests. Concerns have also previously being raised about the standard-issue Sig Sauer handgun being too large for the hands of some female detectives for safe use.

The action plan also commits to the publication of an amended uniform policy to “avoid inadvertent gender discrimination”. This follows on from an updating of the uniform policy last year to allow Sikh and Muslim members to wear religious head coverings as part of the uniform.

The internship programme will allow school-leavers and graduates, particularly those from minority communities, to spend time working within the organisation, before deciding whether to pursue a career as a garda.

The identification of “key challenges” to the recruitment of minorities will also take place.

The document lays out a series of broad initiatives to make the Garda a more welcoming and diverse place to work.

Guidelines will be drawn up regarding the use of “professional and non-discriminatory” language in the workplace. Furthermore, a network of Equality Diversity and Inclusion “champions” will be established to embed a culture of “awareness and respect” in the organisation.

This network will be guided by an internal Equality Diversity and Inclusion (EDI) leadership council which will “own and take collective responsibility for the implementation of the EDI commitments of An Garda Síochána.”

“Fostering and increasing diversity and inclusion in our organisation is not only the right thing to do, but also improves service delivery by benefiting from the talents and life experience of people of all backgrounds,” said Garda Commissioner Drew Harris.

“To be responsive and innovative as individuals and as an organisation we must seek out and learn from multiple perspectives.”