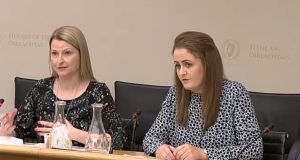 Deputy head of the Garda Analysis Service, Lois West, and senior crime and policing analyst Laura Galligan, grew frustrated with the response from both the Garda and the Policing Authority when they tried to raise their concerns, they told the Oireachtas Justice Committee.

Garda civilian analysts who said they were belittled and had their credibility attacked in Garda Headquarters raised concerns last year about whether “adequate investigations” were carried out into some homicides they found to be incorrectly classified.

In a number of cases they discovered the State Pathologist’s Office had not been informed, for the purposes of carrying out postmortems, about some deaths that had “concerning details”.

The two Garda civilian analysts said they did not want to “scaremonger” about whether some homicides had not been investigated appropriately.

Some of the questions they raised in that regard had already been answered, the Oireachtas Committee on Justice heard, but some were still unanswered.

Deputy head of the Garda Analysis Service, Lois West, and senior crime and policing analyst Laura Galligan, grew frustrated with the response from both the Garda and the Policing Authority when they tried to raise their concerns.

About six weeks ago they contacted the committee and explained how they had they had been treated. The Irish Times last month revealed news of their complaints and on Wednesday the women gave evidence before the committee.

They said they refused to yield to relentless pressure and criticism in Garda Headquarters over a 15-month period beginning at the end of 2016.

During that time, they insisted the problems they found with the way the Garda was recording homicides should be tackled. But they said they were met with resistance.

They stressed the errors were not simply statistical; rather they went to the heart of how the Garda could protect the community.

In cases where men with a history of domestic violence entered into new relationships, for example, the risks to their new partners would be missed by the Garda if the men’s previous crimes were not recorded properly.

The National Women’s Council of Ireland said it was concerned, but grateful, to hear the evidence given by Ms West and Ms Galligan to the committee.

They said early intervention was crucial in preventing domestic violence, up to an including the murder of women by their partners.

Council director Orla O’Connor said a major review of homicides by the Garda must be completed as soon as possible, and advice to protect at-risk people acted on.

In a statement on Wednesday night, Minister for Justice Charlie Flanagan said he was concerned about the statements made by the two Garda analysts, “particularly the suggestion that the non-recording or incorrect recording of incidents of domestic violence may put other women in danger”.

He said the Policing Authority and officials in his department were working with the CSO and the Garda to ensure all crime statistics were properly recorded.

Fianna Fáil TD Jim O’Callaghan welcomed the fact that records from all suspicious deaths held by the State Pathologist’s Office would be compared with the Garda’s Pulse file for each of the deaths. But when that work was completed, the Garda’s files must also be examined to check the nature of the investigations carried out into each death, he said.

“In short, the very suggestion that the inaccurate collation of homicide data could have adversely impacted the depth of investigation into the crime committed will have caused grave distress for the families of victims.”

The Policing Authority said it would study the transcript of the women’s evidence. Chairwoman Josephine Feehily will be appearing before the Oireachtas committee in two weeks.