Taoiseach Leo Varadkar has said “this is going to be a profoundly deep and difficult debate for everyone,” when announcing significant dates in the abortion referendum bill. Video: Oireachtas TV 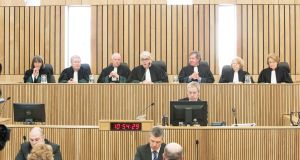 The Supreme Court sits in Limerick to decide the extent of the constitutional rights of the unborn. Photograph: Liam Burke/Press 22

The Supreme Court has delivered a landmark unanimous ruling that the unborn has no constitutional rights outside the right to life in the Eighth Amendment.

The “most plausible” view of the law before the 1983 amendment was that there was uncertainty concerning the constitutional position of the unborn which the Eighth was designed to remove, it held.

Its conclusions do not mean the unborn child is “either constitutionally or legally invisible”, it stressed. The terms of article 40.3.3; the fact that account must be taken of rights that will be acquired on birth and the provisions of common law; and statute “all recognise and protect the interests of an unborn child”.

The State, in legislating, was entitled to take account as a factor the respect that is due for human life “as an aspect of the common good”, it added.

However, the Supreme Court upheld other findings by the High Court that the Minister for Justice was required to consider the prospective constitutional rights of an unborn Irish citizen child when considering whether or not to deport their non-Irish citizen parent. In so doing, it dismissed the State’s appeal against a High Court declaration requiring the Minister to consider those rights.

The Chief Justice said the court had been able to come to a consensus on the important issues and the judgment was contributed to by all its members.

The State had secured a fast-track appeal to the Supreme Court against findings by the High Court’s Mr Justice Richard Humphreys in an immigration case involving a Nigerian man, his Irish citizen partner and their daughter, born in August 2015, but who had not been born when the case was initiated in July 2015.

The case concerned the factors the Minister for Justice must take into account when considering an application relating to deportation where it was expected the potential deportee would become the father of a child.

It also said the unborn is a child within the meaning of article 42A, inserted as a result of the 2012 Children’s Referendum, which requires the State to protect the rights of “all children”.

Based on his findings, Mr Justice Humphreys held the Minister had invalidly stated he was not obliged to give any separate regard to the position of the unborn and declared the Minister is obliged to have regard to the fact of pregnancy and the likely impact of deportation on the rights the Irish citizen child would acquire on birth.

The unborn, at the time the Minister was asked to revoke her father’s deportation order, had existing constitutional rights not limited to article 40.3.3 and particularly to the care and company of her father, he said.

A core issue in the State’s appeal against his judgment concerned whether the unborn has constitutionally protected rights outside article 40.3.3. The State maintained the unborn’s constitutional rights are confined to the right to life in article 40.3.3 and any other rights become effective only on a live birth.

On Wednesday, the Supreme Court ruled the Minister must consider the pregnancy of the partner of the proposed deportee, the likely birth in Ireland of a child of the potential deportee and the fact an Irish citizen child will, on birth, acquire constitutional rights which may be affected by deportation. Having done so, the Minister is not precluded from refusing to revoke deportation, it stressed.

The High Court decision on that aspect was therefore correct and the Minister’s appeal in that regard must be dismissed, it ordered.

It also found that the various common law cases, statutory provisions and pre- and post-Eighth Amendment cases that the High Court relied on to find the unborn has constitutional rights outside article 40.3.3 did not support such findings.

While stressing that its decision in that regard did not alter the decision dismissing the appeal, it said the Minister was not obliged to treat the unborn as having constitutional rights outside article 40.3.3 and reversed the High Court findings that the unborn has rights outside that article and is a child under article 42A.

1:23 Coronavirus: Need to move away from the ‘langauge of blame’ - Holohan says

University of Limerick to refund students living in campus accommodation 21:59
Residents can return to Belfast nursing home after change of management 21:30
Many Leaving Cert students likely to defer college places this year, says report 21:02
‘Unacceptable’ that Cahersiveen direct provision staff not Garda vetted 20:31
Coronavirus: Need to move away from the ‘langauge of blame’ - Holohan says 20:22

1 Explainer: Did the Taoiseach ignore public health rules by going on a picnic?
2 Miriam Lord: Leo’s Phoenix pecs just a storm in a bag of cans
3 Coronavirus: Need to move away from the ‘langauge of blame’ - Holohan says
4 University of Limerick head resigns over personal Covid-19 health concerns
5 Dig for remains of Red Hugh O’Donnell finds skull and coffins
Real news has value SUBSCRIBE