Gardaí travel to Romania to interview suspect in Cork murder 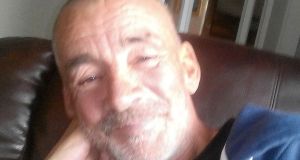 Gardaí investigating the murder of a homeless man in Cork last month have travelled to Romania to interview a 29-year-old man.

A team of four detectives, accompanied by a Romanian member of An Garda Síochána, flew to Bucharest earlier this month to question the man in connection with the death of father of three Frankie Dunne (64).

Mr Dunne, who was from Churchfield on Cork’s Northside but had been living rough, was murdered after leaving Cork Simon’s Clanmornin House on the Boreenmanna Road at 7pm on December 27th.

His dismembered remains were found in the back garden of a derelict house less than 500m away at about 4pm the next day.

Gardaí believe he was murdered on the grounds of the house and his killer began dismembering his body but was disturbed. Investigations quickly led gardaí to focus on a Romanian man living in Cork, who travelled to Belfast on December 30th, caught a flight to Edinburgh and from there flew to Romania.

Gardaí made contact through Europol with Romanian police in the man’s home town near Bucharest and travelled to Romania on January 15th. Romanian police had located the man and requested he voluntarily attend at the local police station for interview in the presence of investigating gardaí.

The man spent several hours answering questions put to him by Romanian police on behalf of the gardaí who sat in on the interview.

It is understood the man was cautioned that anything he said could be used in evidence against him as part of the investigation into the killing of Mr Dunne.

The man also provided forensic samples which will be sent to the Forensic Science Ireland laboratory for analysis to see if they match samples taken from the murder scene.

Gardaí hope to receive a statement in the coming weeks from their Romanian colleagues based on the interview with the man which gardaí will include in a file sent to the DPP.

If the DPP decides there is sufficient evidence to charge the man with Mr Dunne’s killing, it will then be open to gardaí to apply for a European Arrest Warrant.