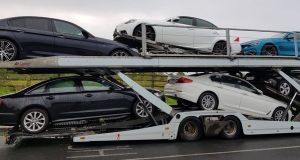 Some of the cars seized from a car dealership in Co Tipperary. Photograph: An Garda 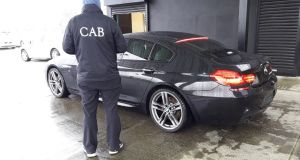 A Cab officer with one of the high value cars seized in Tipperary on Thursday. Photograph: An Garda

Four people are being questioned following the seizure of more than €2 million worth of cash and luxury cars at a Co Tipperary car sales firm following a year-long investigation by the Garda and UK police.

Eighty-five cars, two flat-bed trucks, and a car transporter were seized from the Co Tipperary car sales yard, along with €21,000 in cash and over €200,000 lodged in banks.

Investigators believe a UK-based gang, controlled by criminal figures in Lithuania and Pakistan, bought a disused Co Tipperary filling station and used it to sell cars sourced or stolen in the UK.

It is also suspected that the criminal gang ran a so-called invoice redirection fraud, where businesses are fooled into transferring money to accounts wrongly believing that they are paying suppliers.

Most of the vehicles in the Co Tipperary forecourt were immediately seized and removed on a train of low-loaders to a secure, undisclosed location. If proven to be the fruits of criminal activity, the vehicles will be auctioned.

The year-long cyber-fraud and money-laundering investigation, codenamed Operation Bagana, has been in co-operation with West Midlands Police in the UK.

In a series of simultaneous raids in Dudley and Sandwell close to Birmingham, West Midlands Police arrested two women and two men, “on suspicion of money-laundering and fraud”, a police spokeswoman told The Irish Times.

The head of Cab, Det Chief Supt Michael Gubbins, said the operation was “an example of the ongoing co-operation” between Cab, the Garda and UK forces against international organised crime.

“Our activities are in furtherance of the Cab mission ‘to deny and deprive’,” he said.