Former head of ODCE declines to comment on FitzPatrick case 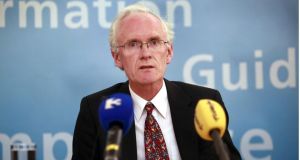 Former director of corporate enforcement Paul Appleby has declined to comment on whether he will co-operate with a report ordered into the agency’s role in relation to the trial of Seán FitzPatrick.

The Minister for Jobs, Mary Mitchell O’Connor, has requested that the current director, Ian Drennan, give her a report following the end of the trial of Mr FitzPatrick.

Judge John Aylmer in the Circuit Court strongly criticised the agency’s conduct of a criminal inquiry into Mr FitzPatrick’s dealings with the bank’s auditors in relation to his loans. The judge said witnesses had been coached, the agency had tried to “build a case” and its inquiry had been biased and partisan.

He directed the jury to acquit Mr FitzPatrick on all charges, and told the 68-year-old, who has been under investigation since 2008, that he was “free to go”.

The Office of the Director of Corporate Enforcement (ODCE) has said it accepts the judge’s criticism of its investigation but said the practices involved date back as far as early 2009.

Without naming him, it said the former director, Mr Appleby, had retired in 2012 and been replaced by Mr Drennan. Since then the agency had undergone “significant change”, it said.

Mr Appleby said he did not propose to comment about the investigation “at this time” and did not know if he would in the future. “I will consider if I will do so later on.”

He also said he did not want to comment at this time on whether he would co-operate with the compiling of the report sought by the Minister.

The ODCE said the report would be prepared and furnished to the Minister as a matter of the highest priority. However, it also pointed out that on foot of directions by the trial judge, its staff had been excluded from large portions of the trial and so the agency was not, at this time, in possession of complete information on all aspects of the matter.

It said the report was the appropriate mechanism through which to make the full facts available to the Minister.

“Accordingly, the director is not acceding to requests from the media for interviews at this time.”