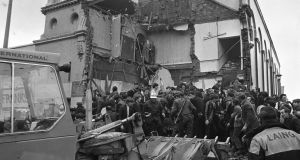 A file image showing the aftermath of the Shankill Road bombing on December 13th, 1971. Photograph: The Irish Times

A new pension for victims of the Troubles that has been passed in Westminster “rules out” IRA members injured while carrying out attacks, one of the campaigners for the payment has said.

Alan McBride, of the Wave trauma centre, said the pension is for people “injured through no fault of their own.” His wife Sharon and his father-in-law were killed in an IRA bomb on the Shankill Road, Belfast in 1993.

The compensation will not include those who injured themselves, he told RTÉ radio’s Morning Ireland. “We’re talking about a relatively small group of people that went out to cause harm to others and injured themselves so those folk will not be included.

“Our guys have been lobbying for this for the past eight years - it is a really good news story. So to have it surrounded by this controversial point for something which is not now going to happen, has taken the gloss a little bit off their celebrations. Because it’s not often that pressure groups and lobbyists actually get a successful outcome - quite often it ends in disappointment.

“For our guys to get this over the line – [THEY]haven’t actually received the pension yet, but we’ve been reliably told that it will happen next year.”

Mr McBride acknowledged that for victims with psychological issues as a result of the Troubles it will be a much more difficult fight.

“The two issues that the pension is going to be based around is permanent and life-limiting - so if you have a permanent life-limiting injury in relation to the Troubles well then you should qualify for this pension, but obviously for physically disabled people it’s much easier - you can see the disability in front of you.

“But for people whose disability is hidden they’re going to have to verify what happened, when it happened and also the fact that it’s permanent, so they’re going to need hospital reports, psychiatric reports.

“You cannot have people just rocking up to their GP saying: ‘I’ve got PTSD I need this pension’ that just won’t be enough evidence. They will have to basically verify what happened, when it happened and how it affected them.

“This pension is not compensation, but it is basically an acknowledgment payment that wrong was caused, so you cannot give this pension to people who actually caused the harm.”

Mr McBride said that the man (Sean Kelly) who planted the bomb that killed his wife and father-in-law (and was injured himself), “was not injured enough.”

He said it would be “an absolute insult” to the family of Leanne Murray, “a little 13-year-old girl who lost her life in that bomb: she wasn’t obviously working, there was no financial loss to the family, so the family will receive absolutely nothing, no compensation whatsoever, so think of the insult it would be to that family if someone like Sean Kelly was to be awarded a pension while the family of the little girl he killed got nothing.

“That’s not to say that we shouldn’t provide care and counselling services for such people. There are other types of help that we could provide for the family, this is not an attempt to change the definition of victim. I’m quite happy with the definition as it is, this pension is a separate issue, it is an acknowledgement that harm was caused to these people.”

Wayne Fitzgerald (47) brought father who had dementia to bank to withdraw €9,250