The aircraft crash landed into a garden of a house in Carlingford about 5.15pm 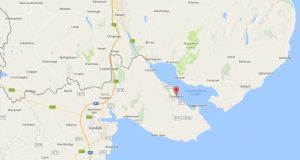 The crash occurred in the Cooley Mountains, Co Louth, at a place known as Top Hill near Carlingford.

The emergency services are at the scene of a helicopter crash in which a father and son were injured on Sunday evening.

The aircraft crash landed in the garden of a house leaving the men on board in a serious condition.

The crash occurred in the Cooley Mountains, Co Louth, at a place known as Top Hill near Carlingford.

The older man (70s) was airlifted to Beaumont Hospital, north Dublin, by an Irish Coastguard helicopter.

His son (40s) has been taken to Our Lady of Lourdes Hospital, Drogheda, Co Louth.

“Gardaí at Dundalk along with other emergency services attended the scene of a helicopter crash at Top Hill, Carlingford, Co Louth, this evening at approximately 5.15pm,” a Garda statement said.

“A helicopter crash landed in a garden at the foot of Top Hill. The pilot and passenger were removed from the scene.

“One man was airlifted to Beaumont Hospital and is in a serious condition and the second man was taken to Our Lady of Lourdes Hospital, Drogheda.”

The Air Accident Investigation Unit had been notified and investigations were continuing.