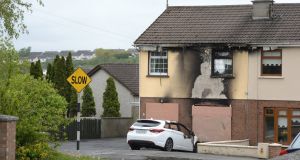 Recently, the Garda Síochána appointed an inspector in Drogheda whose main job is to help families facing extortion from drug dealers. It is a measure of how bad things have become in the Co Louth town.

Many of those using drugs in the town have run up debts with the main gangs. The debt is then used as leverage to extort money from the addict, but also from their families.

Sometimes, the debt is “sold on” to other gangs, who impose arbitrary interest increases. Often, or even usually, the debt falls on the shoulders of parents and siblings. If they refuse, or are unable to pay, brutal consequences can follow.

Last month, Cllr Ruairí Ó Murchú told the Drogheda Joint Policing Committee he was aware of one man who had paid one of the gangs €40,000 to clear a debt they said was owed by his daughter.

“People are afraid, they are embarrassed, they just want it to go away, so they pay,” he said. In some cases, the gangs came back for more money, even when the original debt has been paid off.

The gangland feuding in Drogheda makes the situation worse; two gangs have inflicted extreme violence on each other for almost a year. Each attack generates more fear, which is cruelly used to extort even more from victims.

Local Garda management has responded by appointing an inspector and charging him with special responsibility for taking reports of threats and extortion against families in Drogheda. Many are too frightened to come forward.

“We really want to engage with families. Drug dealers won’t go away. Once they know the tap is open, they will keep coming back,” Chief Supt Christy Mangan of the Louth Garda division told last month’s policing meeting.

Much of the violence is centred on Moneymore and Rathmullen Park. Garda leave has been cancelled and a small number of extra gardaí deployed to the area.

But the Garda armed units that would normally saturate Drogheda given the current circumstances there have been pulled away to the border because of a spate of ATM robberies.

Meanwhile, a cluster of attacks has grabbed attention, including petrol bomb attacks. Worryingly, the perpetrators are perfecting their skills. Fewer petrol bombs are missing their targets.

Last weekend’s violence was the latest in a series of high-profile incidents since last July, when a gang member was shot at his home on a Drogheda halting site and left paralysed.

Tensions had been simmering for a long time before, but July lit the touch-paper. During one week last November, Drogheda saw arson attacks, a pipe-bombing and an abduction in which a young man was beaten and stabbed.

He was rescued, close to death in a bath, when gardaí received information he was being tortured in a house on the Moneymore estate in Drogheda and burst into it.

Shortly afterwards, gardaí and fireman had to deal with a car set alight with gas cylinders inside. In February a man was shot and badly wounded while sitting in a car in a Drogheda shopping centre car park in the middle of the afternoon.

That man and the victim of last July’s attack are very close associates and are senior members of the smaller of the two gangs involved in the feud. Both have been left with life-changing injuries.

One of the gangs has regional significance. With a propensity for extreme violence, it is a mix of settled people and members of the Traveller community, with the latter driving the violence, gardaí say.

The second gang is regarded as being of national scale. It has been targeted by the Garda’s national units for many years, for example, and is suspected of involvement in at least three murders, though not linked to the feud.

Some members of that gang are suspected of killing Willie Maughan (35) and Latvian national Anastasija (Anna) Varslavane (21). They were last seen in Gormanstown, Co Meath, on April 14th, 2015.

Gardaí believe they were killed and their bodies disposed of because a senior gang member feared the couple were about to go to the Garda and link him to the gun murder of Benny Whitehouse in Balbriggan in 2014.

The gang leader is currently in prison, but due for release soon. “Introducing him back into the equation is not exactly going to having a calming influence,” said one officer. Even gardaí have been threatened.

The Criminal Assets Bureau is investigating the assets of the main criminals involved in the feud, and criminal charges for some of the worst attacks are expected.

However, the ATMs investigation is stretching Garda resources. “It’s just unlucky that those thefts and this feud are going on in the same area at the same time. That is stretching us big-time, there’s no point saying it isn’t,” said a source.