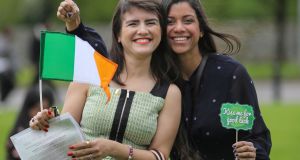 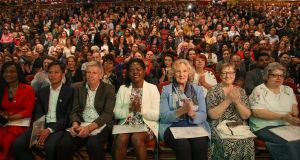 New Irish citizens have been urged to take part in the upcoming referendum on divorce on May 24th.

A ceremony conferring citizenship on almost 2,500 people from 90 countries heard from the chairwoman of the Referendum Commission, Ms Justice Tara Burns.

People living in Ireland had the right to vote in different types of election, but only citizens of Ireland could vote in a referendum proposing a change to the Constitution, she said.

The website, checktheregister.ie, gives access to downloadable forms through which to register for the first time, or to change status to reflect your citizenship. If new citizens complete and return these forms by May 7th, they will be entitled to vote in the May 24th referendum on the regulation of divorce.

Ms Justice Burns said the referendum about the regulation of divorce had two parts and the second part of the proposal related to foreign divorces.

Retired High Court Judge Bryan McMahon said the oath of loyalty and fidelity to the Irish State made the new citizens equal to those who had been here generations.

“We have no second-class citizens,” Mr Justice McMahon said. “Participate fully in the political system. Vote. You have a right to vote now.”

Mr Justice McMahon also urged the new citizens not to forget their old countries, their stories, and their songs and to bring with them their own memories.

The first thing everyone wanted to do was to apply for a passport, but they should also buy a copy of the Constitution, he urged.

“Gently assert yourselves in your new communities and you will be surprised what welcome you will find there,” he also said.

Poland, with 406 people, was the top nationality, followed by 309 from the United Kingdom and 218 from Romania. Indians are the fourth-highest grouping, and some 68 new citizens originate from the US, the ninth grouping, followed by people from China/Hong Kong.

In a recorded address, Taoiseach Leo Varadkar said his father was Indian, his sister was born in the UK and some of his relatives lived in America.

“My family story, like yours, is very much defined by migration,” he said.

Minister for Justice Charlie Flanagan said since 2011, when large-scale citizenship ceremonies were introduced, some 122,000 people from 180 countries had become Irish citizens.

“It is truly remarkable this tiny island on the edge of Europe facing into the Atlantic has as its citizens people from every country on this planet,” Mr Flanagan said.

Lucimeire Da Silva, originally from Brazil and now living in Dublin, worked as an extra on RTÉ’s Fair City for a while. The mother of a two-year old is married to James McClafferty from Donegal and has been in Ireland for eight years. Seated in the front row at the ceremony and waving an Irish flag enthusiastically, Ms Da Silva said: “I love Ireland.”

Ravinder Dhingra, from Jaipur, India, who has been living in Glenageary in Dublin for six years, said it was a very big day for him.

“I love this country,” Mr Dhingra said. He lives with his wife and five-year-old son and they have their own house now. Working in IT, he had come to Ireland for an assignment, but stayed. Asked what he liked so much about Ireland, Mr Dhingra said: “It’s really the people.” The values of the Irish in terms of family and community were very much the values of his place of origin, he said.

Carol Gilbert, from near Skibbereen in west Cork and originally from Edinburgh, was among more than 300 people from the UK who became Irish citizens. “Brexit was the trigger,” said Ms Gilbert, a retired journalist and the recipient of a lifetime achievement award by Cork Environmental Forum.

Her father had been Italian and she was born during the second World War and she knew all about racism, she said. She had brought her four sons up to believe everyone was equal. Politically she had never had a full voice here but now she would be able to vote in the referendum. Since coming to Ireland more than 30 years ago, she had discovered most of her ancestors had, in fact, been Irish, dating to the 1700s.